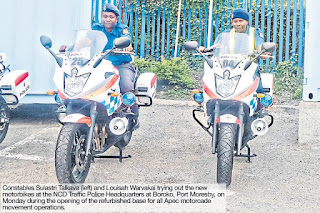 TWO female traffic police officers participating in the Asia Pacific Economic Cooperation (Apec) meeting as motorcyclists say they are looking forward to an experience of a lifetime.
Constable Sulastri Talkava and Constable Louisah Warvakai are among the first seven women to participate in the bikers’ and drivers’ training alongside their male counterparts under the PNG-Australia Policing Partnership (PNG-APP) programme for the Apec Motorcade.
“This will be my first experience to participate in such a big event like Apec since I first joined the Royal PNG Constabulary five years ago,” Talkava said.
Warvakai joined the force in 2014 and said this experience would be a big one for her since she became a police officer.
They both expressed similar sentiments that even though the length of their training was only a month long, the experience would be an advantage for them in the long-run.
“Despite the short training, I am confident the training will go a long way to assist in our
career as we move on after the Apec this year,” Warvakai said.
Talkava said she felt that when training ended in two weeks, she would be ready to tackle the Apec head on in order to gain experience as well as contribute towards running a safe motorcade for the world leaders.
Meanwhile, team leader for motorcycling training acting inspector Leanne Giraud, said their goal was to get 10 per cent participation of women in the Apec motorcade team among the male officers.
“So we have actively recruiting on that gender to try and get the women included in all the programmes both drivers and the bikers,” he said.
Giraud said three police officers were already qualified for the bikes and the other four, who included Talkava and Warvakai, were still undergoing training.
“We have kicked of the training courses for the bikers as well as the driving and this is week two of the programme,” she said.
“If we can get more women to participate in the biking, that will certainly be a big bonus.”
Giraud said they expected to recruit the around 80 officers, both male and female as bikers and 120 officers for drivers. The National
SHARE THIS
Share it Tweet Share it Share it Pin it