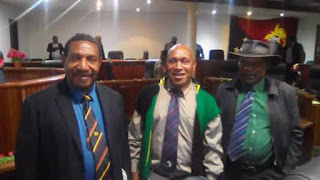 The Assembly Chairman Grand Chief Sir Peter Ipatas said out the total Budget of K91, 145,0900 will come from Internal Revenue and and K241, 700,000.00 will come from Nation Government budget.

The Assembly members, priority area to pump more funds is on Law and Order problems. Other development sectors were funded less while compared to previous budgets.

The decision was made to provide quality education in the province. The Assembly further passed a resolution that, a lot of funds were missed as students took advantage of the free education policy and failed to concentrate on their studies. As such a lot of students failed and public funds were wasted. Hence, the Assembly urged parents to meet their kids fees.

Further more, among the Assembly members were Hon. Minister for Civil Aviation and member for Kandep Alfred Manase and Hon. Member for Laigaip Porgwea Tomait Kapil were also present to pass the Bill.

The Hon. Minister for Civil Aviation Alfred Manase, also told the Assembly that Wapenamanda airport will be upgraded this year.

He told the Assembly that he had secured a funding of K20m to upgrade the airport and will be put on tender this March.

National Government allocated K300,000.00 each. He concluded by an appeal to the people of Enga to do away with free hand out and change their mindset to adapt to a changing environment.