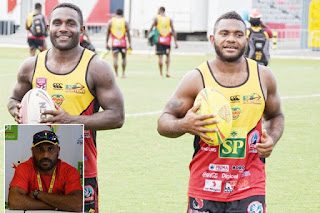 A huge clash is on the cards this Easter Sunday at the National Football Stadium when the PNG Hunters take on Redcliffe Dolphins in Round 7 of the Intrust Super Cup competition.
The Hunters are coming off a bad loss to Sunshine Coast while the Dolphins scored a resounding 24 nil victory over Wynnum Manly Seagulls.
Hunters Coach Michael Marum has named his side to face the Dolphins.

Wartavo Puara has been named in the starting line-up. Also returning to the starting side is Adex Wera and David Loko from injury and sickness plus Wellington Albert from his two match suspension.

Willie Minoga and Stanton Albert will start from the bench with Rhadley Brawa, Moses Meninga, Enock Maki and Lawrence Tu’u also named on the extended 20 man squad (three to be omitted)

Tickets can be purchased from Stop N Shop at Rainbow, Hardware Haus at Waigani, Brian Bell shops at Vision City, Home Centre at Gordons and Plaza in Boroko and Big Rooster outlets at Koki and Erima.

Tickets will also be on sale at the National Football Stadium on game day on Sunday. Gates will open at 12pm.
The round seven game which is for the Stan Joyce Cup will kick off at 3pm.