Home Headlines PNG News Bougainville should not break away from PNG: Somare

Bougainville should not break away from PNG: Somare 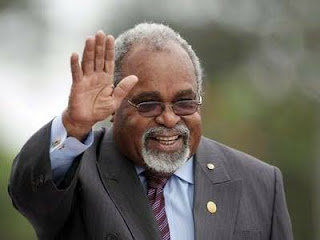 “If that is the type of government they want, allow them, then give it to them, I am talking about autonomy,” Sir Michael said. “There are two types of powers, delegated powers and transfer of powers – in Bougainville, if the transfer of powers were given to them, I don’t think they will be talking about independence today,” he said. “For independence, I still believe when Bougainville goes to elections, you should get a piece of paper and mark my name, I tell you, when you go to the next elections, they will be voting for Papua New Guinea,” he said. Post Courier/ ONE PNG
SHARE THIS
Share it Tweet Share it Share it Pin it