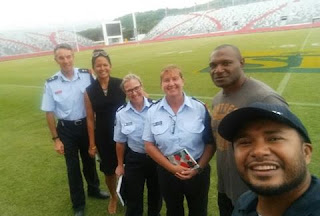 SP PNG Hunters will play a game of touch football against a select joint Royal Papua New Guinea Constabulary and Australian Federal Police side at the National Football Stadium in Port Moresby on Wednesday (tomorrow) as a community building initiative, especially to support efforts to advocate against gender-based violence through PNG Tribal Foundation’s “Senisim Pasin” campaign.
The friendly game is an initiative of Advisor to the PNG – Australia Police Partnership (APP) Sergeant Dean Saddler and SP PNG Hunters coach Michael Marum, while the “Senisim Pasin” campaign is a strategic initiative of the PNG Tribal Foundation in alliance with the National Strategy for Responsible Sustainable Development (StaRS).

“Michael (Marum) and I started discussions late last month on playing a game of touch footy between the Hunters and the PNG and Australia Police personnel to build community goodwill. We quickly realised that with the Hunters’ huge fan base throughout the country, it was the perfect opportunity to engage them with a program that benefits our communities. So in partnership with the PNG Tribal Foundation we have engaged the Hunters staff and players as advocates for the ‘Senisim Pasin” campaign,” Saddler said.

Coach Michael Marum said he was happy to involve the SP Hunters in community and charity initiatives. “The “Senisim Pasin” campaign is important to every individual in PNG and we support such initiatives where we hope it brings changes to the lives of our people,” Marum said.
PNG Tribal Foundation Director of Operations Michelle Hau’ofa said: “We work in partnership with all of society to eradicate violence, so to have our nation’s heroes, the mighty PNG Hunters, as advocates for our collective anti-violence message sends a powerful message to our people that violence is wrong and that we must work together to keep our communities safe for everyone.
”Hau’ofa said she was excited at the opportunity to engage such powerful advocates for the Senisim Pasin” campaign which presents the darkness of violence in a manner geared to inspire hope and change by highlighting the value women bring to society, the positive work already being done to address GBV, and by giving real life examples of survival, redemption and the power of changed lives. The film is part of a campaign which includes tools for conflict resolution and a call to action for every viewer to be part of the ‘Senisim Pasin’ movement.

PNG Tribal Foundation will show the “Senisim Pasin” film to the SP Hunters, the combined Police team and invited guests. This will be followed by a game of touch rugby between the SP Hunters and the staff of the RPNGC and AFP.