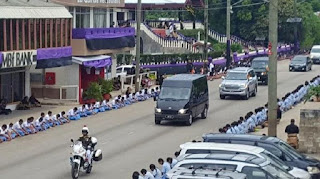 School students have sat along a stretch of road nearly 20 kilometres long to pay their respects to Tonga's late Queen Mother Halaevalu Mata'aho who has been taken to the royal palace in Nuku'alofa.

Queen Mata'aho died last weekend at the age of 90 in Auckland and was flown back to Tonga by a Royal New Zealand Airforce Hercules this afternoon.

RNZ reports the royal cortege traveled by road from the airport to the capital with school children lining the streets along the way, some having waited over three hours amid intermittent showers, to pay their respects.

"I remember when I was a kid, when Queen Salote's body was arriving in Tonga in 1965," Mr Maka said.

"It's a huge event for a five year old, so it will have the same feeling of some of the school children that are actually standing and paying respect to a remarkable woman," said Melino Maka.