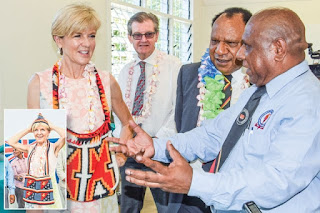 AUSTRALIAN Foreign Affairs Minister Julie Bishop visited a number of Australian government-funded projects in Lae as part of her trip to Morobe.

She arrived in the country on Tuesday and  attended the Australia-PNG Business Council meeting in Madang before travelling  to Lae on Wednesday.
Bishop opened the Australian Consulate in Lae that evening.
She visited the Angau Memorial Hospital maternity ward, the Lae School of Nursing and the new Angau Dental Clinic before travelling to the National Agriculture Research Institute (Nari)  headquarters at 10-Mile.
Bishop was accompanied by the Australian Minister for the Pacific and International Development Conchetta Fierravanti-Wells, Australian High Commissioner to PNG Bruce Davis and PNG Foreign Affairs Minister Rimbink Pato.

“We are really excited to observe the standard and quality of that redevelopment.”
The first phase of the redevelopment cost K25 million and work started in late 2015.
The Lae School of Nursing upgrading and construction work cost another K25 million, with work expected to be completed at the end of this month.
The funding came from a total commitment of A$420 million (K998 million) under a joint understanding between the two governments.
At the Nari, she inspected a new solar-powered rice milling machine produced by Trukai and Nari.
Bishop said: “I am proud of the partnership that has existed since 1997 between Australia’s Centre for International Agriculture Research and PNG’s National Agriculture Research Institute.” The National/ONEPNG
SHARE THIS
Share it Tweet Share it Share it Pin it