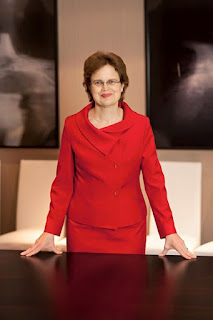 The Secretary will co-chair the Bilateral Security Dialogue (BSD) on 22 February. The BSD is an important element of the Papua New Guinea-Australia partnership architecture, established after the 2013 Papua New Guinea-Australia Ministerial Forum, to provide a framework to discuss shared security challenges and interests in our region and beyond.
The meeting will bring together security agencies from both countries to discuss shared interests in strategic matters, including developments in our region, transnational crime, maritime security, defence cooperation and the policing partnership.
"Australia and Papua New Guinea are close neighbours and strategic partners and the BSD provides an important opportunity for us to further strengthen the cooperation between our countries,” Secretary Adamson said.

Prior to her appointment as Secretary for Department of Foreign Affairs and Trade, Ms Adamson was International Adviser to the Australian Prime Minister the Hon Malcolm Turnbull MP from November 2015.
From 2011 to 2015 Ms Adamson was Ambassador to the People’s Republic of China. She served in the Australian Consulate-General in Hong Kong in the late 1980s during the early years of China’s reform and opening. From 2001 to 2005, she was seconded as Representative to the Australian Commerce and Industry Office in Taipei.
Ms Adamson has twice served in the Australian High Commission in London, as Deputy High Commissioner from 2005 to 2008 and as Political Counsellor from 1993 to 1997.