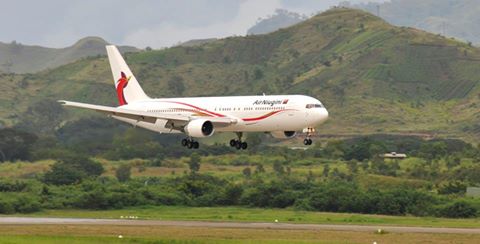 AIR Niugini will begin operations to the Federated States of Micronesia (FSM) in September, chief executive officer Simon Foo says.
He said this would coincide with a meeting of Pacific leaders organised by the South Pacific Forum.
Foo said this yesterday following a meeting last week with FSM’s civil aviation assistant secretary Massey Halbert.
Foo said Air Niugini would start initially with three flights to Chuuk and Pohnpei, two of the four states in FSM.
These flights are scheduled to operate on Sep 1, 7 and 10.  “We will commence flying test tourism flights and following the evaluation of results, Air Niugini plans to inaugurate twice weekly regular scheduled flights from Port Moresby to Chuuk and Pohnpei, operating on Wednesdays and Saturdays,” Foo said.
“These flights will also enable passengers between the Pacific, Australia, Indonesia, the Philippines and FSM to connect through Port Moresby, saving them considerable time and opening the possibility of stop over tourism within PNG. The direct PNG to FSM flights will also foster closer trade links between industries, including fishing and tourism.” FSM is located in Northwestern Pacific. It is one of the most remote and beautiful tourism destinations.  It is made up of over 600 islands with Chuuk and Pohnpei, the two most populated states.
SHARE THIS
Share it Tweet Share it Share it Pin it