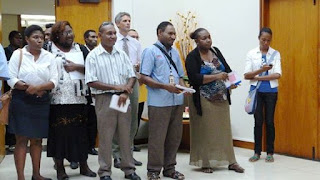 The Media Council of Papua New Guinea (MCPNG) has condemned the attack and harassment of journalists and a photographer covering Western Province Governor Ati Wobiro’s court proceedings. The media personnel from the Post-Courier, The National and PNG Loop were at the National and Supreme Court precinct in Port Moresby on Wednesday,
covering attempts by lawyers representing the Governor and his co-accused to apply for bail, when a group of people set up on them.

The incident occurred as the governor and his co-accused were being driven back to the Bomana correctional service facility outside Port Moresby. The Post-Courier chief photographer Tarami Legei was verbally abused and physical attempts were made by two different people to remove his camera. Two other journalists from PNG Loop and The National were also verbally abused by the same crowd.
The MCPNG President Alexander Rheeney condemned the harassment and urged the public to respect the role of journalists and photographers in PNG.
“The harassment and attacks directed at the media personnel at the court precinct on Wednesday were unwarranted and unacceptable. The Media Council of Papua New Guinea condemns the actions of those who do not seem
to understand the role of the media, especially the need for the media to ensure leaders including politicians are accountable to their constituencies and are transparent in the eyes of the people,” he said. Court security officers went to the aid of the media personnel and called the police. But the attackers fled the scene before the police arrived. Mr Rheeney thanked the court security and the police for their quick action. Mr Rheeney said public scrutiny of the media is acceptable but stopping them
from taking pictures and getting stories of public figures such as politicians is going one step too far. The MP and his co-accused have been remanded into custody since Tuesday
after the National Court found them guilty of conspiring to defraud Western Province of K7.06 million. According to court documents, Wobiro, Dr Modowa Gumoi and a Norman Carl May conspired and established Fly Care Foundation
and channeled K7.06 million in public funds to the entity.
SHARE THIS
Share it Tweet Share it Share it Pin it