TIPNG strongly condemns the use of assault weapons on students 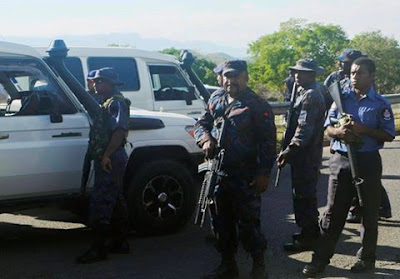 Transparency International PNG (TIPNG) strongly condemns the shooting by police of university students.
Shooting at defenseless students is simply unacceptable. Approaching, with dangerous weapons, student
protesters is contemptible.
Papua New Guinea is being dragged into chaos by people who apparently expect impunity from the law.
Carrying lethal weapons is surely evidence of willingness to kill students.
This country has been dragged to the brink again and people need to step up to the challenge of preventing the
situation escalating.
"There can be no excuse for the use of high-powered assault weapons in dealing with a group of defenseless
students in expressing their rights," said TIPNG Chairman, Mr Lawrence Stephens.
"All too often we see weapon use by police in situations where it should not be used: we saw weapon abuse
during the Hanuabada Village shooting, at traffic roadblocks, during the bettlenut ban enforcement around the
city and in previous demonstrations by students," pointed out Mr Stephens.
There is too much evidence of lack of discipline on the use of weapons by the police force. The use of highpowered
guns are provocative and the public, especially the students, are cautioned not to fall into the trap of
being provoked!
SHARE THIS
Share it Tweet Share it Share it Pin it