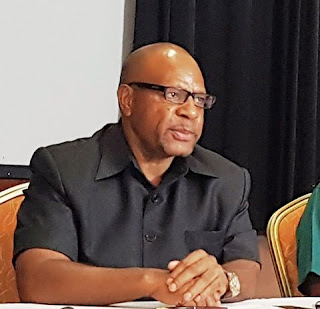 The Papua New Guinea Government has warned people attempting to commit illegal acts as part of attempts to hijack student protests that they will face the full force of the law.
Chief Secretary Isaac Lupari said activists involved in the latest attempt to cause civil disturbances were not students but agitators who had no interest in student matters.
“These agitators devote their lives to stirring the public up for the highest bidder, and now they are trying to hijack student protests,” he said.
“These people are subject to the laws of our country and if they are found to be inciting people to commit acts that are illegal, they will be arrested and prosecuted by law.”
He said due to the serious nature of the threats of violence, the National Security Advisory Committee would be convened to discuss the matter.
“Make no mistake, the agitators behind proposed protest are not students, but have much more sinister purposes,” he said.
“The NSCA is the principal adviser to the Government on security matters and will consider certain powers that can be used against this behaviour.
“The extreme action they are trying to stimulate is uncalled for and will not be accepted. I appeal to our students not to be misled by the agitators and to make your own judgments.”
He was responding to a message from an anonymous source that was widely circulated yesterday calling for civil disturbance, stop-work and protests   tomorrow.
Lupari urged people who had read the message on social media to understand the motive.
“There is big money involved in manufacturing protest for people of dubious intent,” he said.
“And members of the public might be fooled into taking part not knowing it is part of broader political campaign.”
Lupari said there were processes involved in staging lawful protests.
“People behind any protest must know there are clear and proper process and these must be followed,” he said.
He said some posted comments “do cross into breaking the law”.
“People who are sending these posts around must be aware of this,” he said.
Lupari said the calls for anarchy by the agitators were entirely separate from student protests.
“The action promoted by the activists is not the Melanesian way where we resolve issues as a community, but is an aggressive foreign style of intimidation and grandstanding.
“The matters they are promoting are also before the court so cannot be properly discussed until they have run their course.”
SHARE THIS
Share it Tweet Share it Share it Pin it