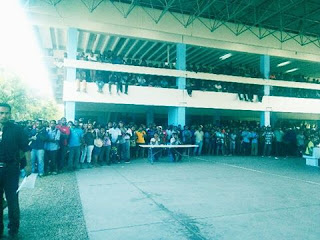 POLICE have turned down a request from University of PNG students to carry out a public awareness.
National Capital District Metropolitan Superintendent Benjamin Turi told student leaders yesterday that he would not allow any public gathering.
“There is a big no now. You hold a referendum according to the SRC constitution and when majority rules, you can go out,” he said.
“Right now, you don’t have a majority ruling. If you don’t hold a referendum, there is a big no from me as the Met. Supt.”
A letter hand-delivered to Turi yesterday as he was leaving the campus had requested police to allow students to continue their activities including the boycotting of classes.
Turi said the SRC constitution stated clearly that any such activities including protest marches by students were allowed if a referendum was conducted and the majority agreed.
Meanwhile, students continued the boycotting of classes yesterday as police entered the university premises to ensure the safety of State assets and students.
Turi said it was done at the request of the university academic senate following reports of intimidation to other students and unlawful behavior that had already amounted to loss of millions of kina for the university. The National / ONE PNG
SHARE THIS
Share it Tweet Share it Share it Pin it