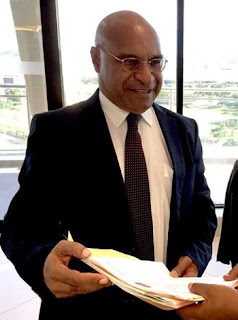 
In making the announcement, PM O’Neill said Mr Bopi’s leadership in overseeing administrative arrangements in the Office of the Prime Minister will make an important contribution to smooth running of the Government.
“I welcome Mr Bopi to the Office of the Prime Minister, and the experience that he brings to the role of Chief of Staff,” the Prime Minister said.
“George Bopi has many years of management experience in the private sector and in government at the provincial and national levels, and an impressive academic background.
“He has significant hands-on experience in managing, training and installing performance management systems and programmes in leading businesses and other organisations in Papua New Guinea.
“Now, as the global economic experiences challenges and we face a slowdown in some of our trading partners, all Government agencies and offices must continue to improve and be more efficient.
“The Office of the Prime Minister must set an example in maintaining the highest standards, and I have confidence in Mr Bopi.
“I have worked with him previously on Prime Minister’s Excellence Awards where Mr Bopi ensured the success of the awards and promoted many outstanding Papua New Guineans.”
Goerge Bopi has over 30 years of management and leadership experience in both private and public sectors.
Prior to his appointment, he was a Principle Strategic Management Consultant with ManTech Consultancy Ltd, based in Port Moresby and Lae. In this capacity, Mr Bopi was the lead consultant and advisor for the National Government's PNG Vision 2050 and the Medium Term Development Plan, and delivered a number of Higher Education Sector projects.
Mr. Bopi has further been involved in nationwide labour market assessments, taught at the PNG University of Technology and worked with the Western Highlands Provincial Government managing the government's infrastructure and business arm, and has taught in and managed Secondary Schools.
Mr Bopi was a council member of the University of Natural Resources and Environment, where he was Pro-Chancellor and a Council member of the PNG University of Technology, as well as other professional associations and affiliations within Papua New Guinea, the Pacific and further abroad.
Mr. Bopi is has a Masters Degree in Management from Monash University in Australia, a Post Graduate Diploma in Human resource Management from Monash University, a Bachelor of Education from UPNG, DipST (UPNG) and a Post Grad Certificate in Executive Top Management (APEC - Osaka, Japan).
SHARE THIS
Share it Tweet Share it Share it Pin it