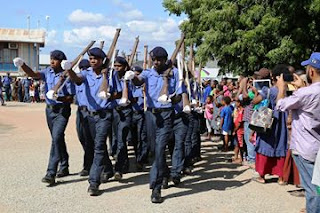 The Prime Minster, Hon. Peter O’Neill CMG MP, has welcomed the graduation of 272 new police recruits from the Bomana Training College last week that he said is an indication of ongoing advancement of law enforcement around the nation.
The Prime Minister said after a decade of not graduating a single recruit from the Bomana Training College, the stream of graduates who are now passing through the college is reassuring.
“We needed a new approach to policing and law enforcement in our country, and this is what our Government is delivering,” PM O’Neill said.
“We have more police on duty around our nation and this is keeping communities and businesses safer.
“There is no doubt that we have a lot more work to do and this underway.
“I congratulate the Commissioner and senior police staff for the reforms that they are leading and their commitment to raising police standards.”
The Prime Minister said increased resources for police was being further complemented by resource funding for the judiciary and correctional services.
“Increasing police numbers is just one part of improving law and order, and we are increasing resources for the judiciary and correctional services.
“We are strengthening the judiciary to better try defendants in a transparent environment where they can fully execute their right a fair hearing.
“For the people who are given a custodial sentence, we are better equipping our prisons to rehabilitate and prepare prisoners to have a lawful life once they are released."
PM O’Neill also noted the broader influences that can increase or decrease crime and said the Government was working to enhance development as a further means of reducing crime.
“People in our country, and everywhere else in the world, are not naturally disposed to commit crimes, but social and economic circumstances often lead them down that path.
“As our economy continues to grow and more people have jobs, this also has a positive influence on law and order.
“Our Government will continue to attracted investment and business to Papua New Guinea, and encourage ongoing economic development. Ultimately we have seen a big reduction in crime over the past five years and we will continue with this progress."