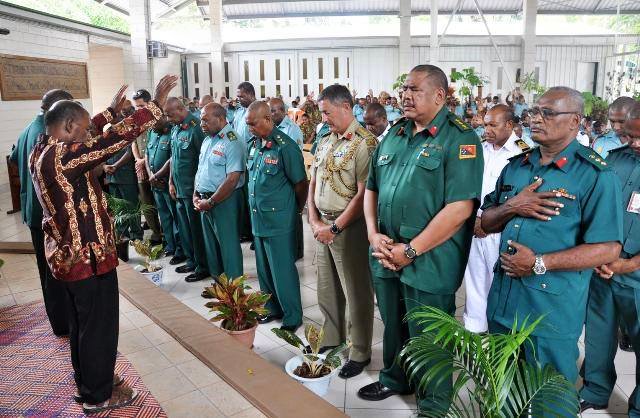 Papua New Guinea Defence Force personnel had been challenged to aligned themselves and walk before God in their career this year in Port Moresby last Friday.
Hundreds of soldiers turn up to dedicate the force to God at St Martins Anglicare Church at Five mile in Port Moresby. Papua New Guinea Defence Force Chaplain Lieutenant-Colonel Misael Baude made the statement based on the book of Genesis chapter seventeen verse 1 using the example of God spoken to Abraham in the bible.
The message reads –I am God almighty, walk before me and be blameless,Chaplain Baude described it as the light of excellent, purity and righteousness.
“We need Gods governing rules to abide by. In order to achieve that, the first way is to put ourselves in right and having the perfect relationship with God. The second way is to ensure your decision making process is always to do what is right.
Papua New Guinea Defence Force Commander Brigadier General Gilbert Toropo in the closing remarks said that the word of God is very important to all Papua New Guineans. When there is no proper access roads into Papua New Guineas homes in the past, missionaries brought the word of God in our rural villages first .That is why it is important that we should put God first to lead us this year.
Brigadier Toropo said that the force vision and priorities can only be achieved when we put God first through unity starting from all PNGDF branch heads down to directors and down.
He thanked all those who work hard last year especially the Australian, New Zealand Defence Staff and encouraged all the soldiers to put extra effort this year to move the force forward.
The dedication ceremony was wonderful as all Port Moresby Base units gathered to seek God first to lead in their respective roles in the force. The Papua New Guinea Defence Force Commander and his entire branch heads, directors and unit commanding officers dedicated themselves to God at the end the ceremony and pledged their honour to serve God, Queen and the country.
Picture caption:Commander PNGDF Brigadier General Gilbert Toropo(5th from right) with all his Branch Heads recommitting themselves to God during the dedication service last Friday at St Martin Anlicare Church in Port Moresby. Picture by PNGDF Media.
SHARE THIS
Share it Tweet Share it Share it Pin it