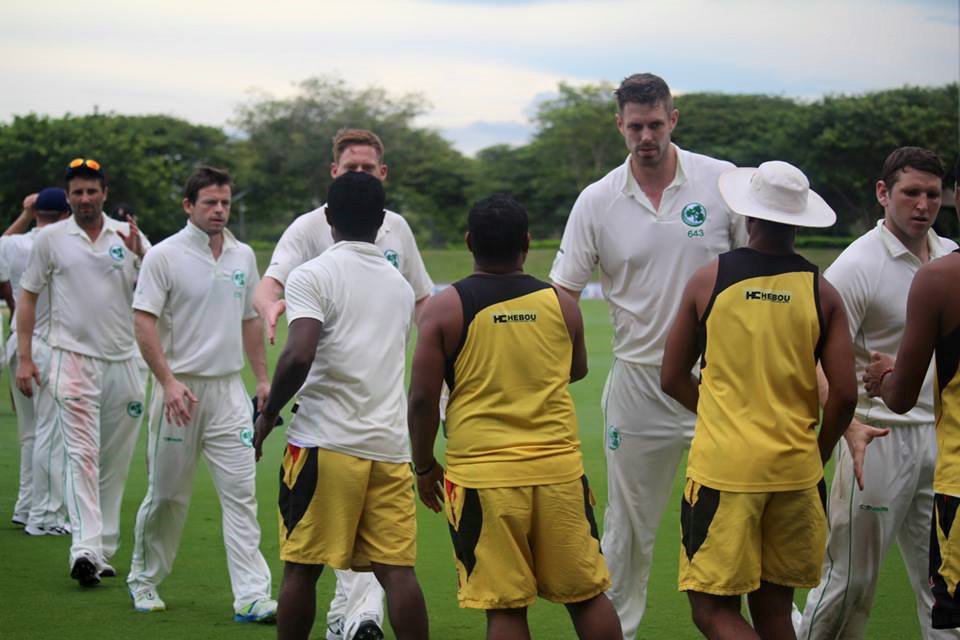 Hebou PNG Barramundis were bowled out for 200 in their second innings, just before tea on the final day to lose by 145 runs against Ireland in the Round 3 Inter-Continental Cup (I-Cup) in Townsville today.
Starting the day at 1/50 with first innings centurion, Assad Vala (17*) and Vani Vagi Morea (18*) at the crease, the HEBOU PNG Barramundis had huge battle on hand to win or at least draw the match against an Ireland bowling outfit with former England Test bowler, Boyd Rankin.
Vala and Morea started steadily, before Tim Murtugh took the prized wicket of Vala (20) to leave the HEBOU PNG Barramundis at 2/64. Morea (35) and Mahuru Dai (4) fell shortly after to leave the HEBOU PNG Barramundis in trouble at 4/83. Charles Amini Jnr tried to take back the momentum from Ireland team with some aggressive batting, before being stumped off Andrew McBrine for 16. Captain Jack Vare then joined Sese Bau to take the HEBOU PNG Barramundis to 5/131 at lunch.
After lunch, Vare and Bau batted very sensibly to take the score to 172 before Bau was cleaned bowled by Rankin for 45. Rankin then trapped Vare soon after for 31 and when Norman Vanua was caught behind for a duck, Rankin had taken three wickets in the space of fourteen balls to have the HEBOU PNG Barramundis reeling at 8/175. Some lower order hitting by John Boge Reva (21) could not stop the inevitable, with the HEBOU PNG Barramundis being bowled out for 200 just before tea.
“We are very disappointed to lose this match against Ireland. The match ebbed and flowed right throughout the four days. We were able to fight right the way through, playing some aggressive cricket. Their experience shone through at the end, having played this format for a number of years,” said HEBOU PNG Barramundis Captain, Jack Vare.
“We will once again take a lot of positives from this match including the bowling effort in the first innings with Norman (Vanua) leading from the front. Assad (Vala) once again showed his class this match, bringing up his second century in the I-Cup in three (3) matches. We are very much looking forward to take on Namibia later on in the year,” concluded Vare.
After notching up their third victory in as many matches, Ireland sit top of the I-Cup Points Table on 60 points, while the HEBOU PNG Barramundis are currently sitting in sixth place with 20 points.
Match Summary
1st Innings- Ireland 10/289 Niall O’Brien 62, Gary Wilson 48, Paul Stirling 42, Norman Vanua 5/59, John Boge Reva 2/25
1st Innings- HEBOU PNG Barramundis 10/188 Assad Vala 120, Jack Vare 22, Tim Murtugh 4/33, Boyd Rankin 3/21, Craig Young 2/42
2nd Innings- Ireland 5/244 dec Kevin O’Brien 75*, Ed Joyce 58, Andrew McBrine 40*, Loa Nou 2/37, Mahuru Dai 1/43, Norman Vanua 1/69
2nd Innings- HEBOU PNG Barramundis 10/200 Sese Bau 45, Jack Vare 31, Boyd Rankin 3/31, Tim Murtagh 2/21, Craig Youn 2/50
Ireland defeated HEBOU PNG Barramundis by 145 runs.
SHARE THIS
Share it Tweet Share it Share it Pin it