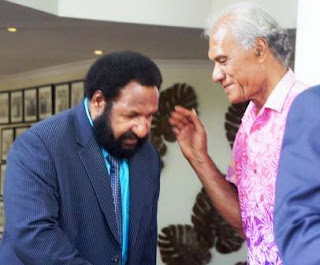 PORT MORESBY: Opposition Leader, Don Polye has met Tongan Prime Minister Akilisi Pohiva and gave his support for Tonga to host the 2019 Pacific Games in Nuku’alofa, Tonga.
Mr Polye said despite the challenges confronting the Kingdom of Tonga at the initial stages in the preparation process in the lead up to the games, Tonga will rise to the challenge and host a successful game.
Mr Polye in a meeting with Prime Minister Pohiva of the Kingdom of Tonga, said Tonga needs every available support to make the 2019 games a successful one.
Prime Minister Pohiva in his discussions, openly said Tonga needs at least US$120 million dollars or over K361 million kina to host the games.
Mr Polye said despite PNG having its own financial challenges and set-backs, PNG has a duty to support Tonga within its affordability.
Mr Polye said other areas of support PNG must lend to Tonga includes the technical support and administration.
The Opposition leader said he was confident development partners like Australia and New Zealand would offer assistance to Tonga to host the games
He added he encouraged Tonga to consider approaching both Australia and New Zealand.
SHARE THIS
Share it Tweet Share it Share it Pin it