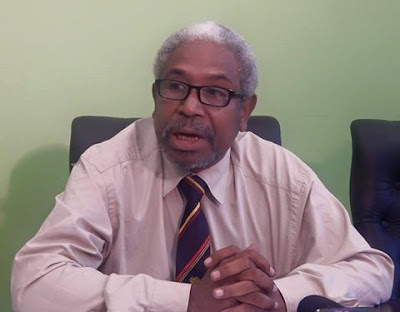 A recent article in the media and an advertisement saying “with my NID Card I can Vote” has not gone down well with the Office of NID and Civil Identity Registry.
In a press conference today Registrar General Mr Dickson Kiragi said that the advertisement was a miss quote and taken out of context, stating that the NID Card is a personal verification utility that can be used to identify an individual during accessing of government and private services.
“Hence this initiative does not replace nor undermine the PNG Electoral Commission’s role in enrolling and conducting elections nor does it affect their voter register,” says Mr Kiragi.
He adds that there were discussion with the PNG Electoral Commission about ways to compliment the Population Register and Voter Register to work in a more systematic manner but this is plans for the future that will see the Electoral Commission as an end user of the NIC Card and population Register for citizens identity verification for their purposes.
“I want the people to understand that the PNG NID Card is a Legal Universal Identity in PNG that supersede all forms of identity in the future, linking 1 person to 1 identity to eliminate identity theft and fraud that is becoming very common in the country,” says the Registrar General.
Meantime, on a more brighter note as far as the NID Project is concerned, Mr Kiragi revealed that over 120, 000 Papua New Guineans have already been registered where over 84, 000 is from NCD alone with 18 years and above at over 64, 000.
MR Kiragi adds, “If we look at the figures that is about 1.3 percent of the country’s population registered in just 6months compared to the 3 percent registered over 100 years dating back to present day.”
So far there is only 8 provincial fixed registration points around the country and the Registrar Generals said that they will be looking to complete setting up fixed registration offices in the remaining 14 provinces in the next couple of months.
SHARE THIS
Share it Tweet Share it Share it Pin it