PNG Prime Minister,  James Marape, MP, has urged public servants within the Department of Prime Minister & National Executive Council to be loyal and committed to their work to serve the country.

He said this during the department’s staff Christmas function at Sir Manasupe Haus in Port Moresby today. 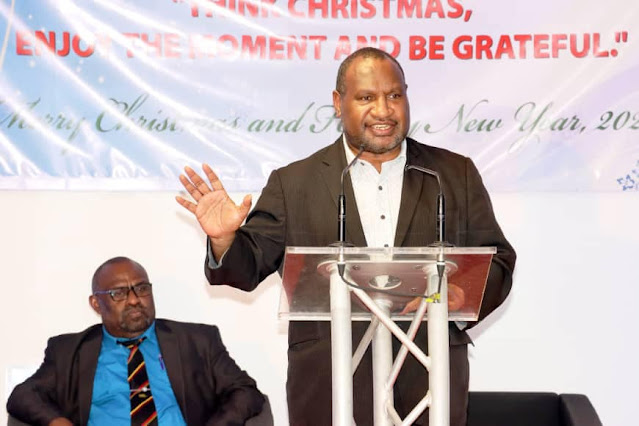 He said every one including himself as prime minister, ministers, politicians and senior public servants were there for a purpose and must remain committed to their work - whether small or big.

“Each one of us have been made and put where we are, in whatever position and division we work, to do our best in our nation’s progress and development,” Prime Minister Marape said.

“We must ask ourselves what we can do for our country and not what we always expect the Government, politicians and country can do for us.

“You and I are one of the, or amongst the top elites and educated people, and are privileged to be working in the public service.

“We are getting paid when majority - over 90 per cent of our people - remain unemployed and are in the far flung fringes of our rich and vast beautiful country.”

Prime Minister Marape told the staff, including his Ministerial staff from the Office of Prime Minister, that their actions and or inactions towards their work could cause and or have a huge impact on the

progress and development of the country.

“We still have about 90 per cent of our people living in poverty and not accessing basic Government services,” he said.

“We owe it to them to work hard to ensure Government policies are implemented and projects delivered on time.

“As we look back on this year 2020, with the many challenges of COVID-19 pandemic, a downturn in our economy and the political events of late, we ask if we have remained faithful to our duties and work.

“Every end of the year, and at other times, we end up having huge workshop luncheons and Christmas functions with food and drinks.

“But have we done enough to ensure our people get the benefits they deserve?”

Prime Minister Marape also informed staff that the Government was focused on the small business sector.

He urged public servants and staff of the Department to look out of their work environment and do something for themselves when they have retired.

Prime Minister Marape, whilst thanking them said their 184 years of combined service to the Government and country, was a sign of commitment and dedication.

He announced the Government was looking at ensuring that public servants and other workers in the private sector could be able to access land to build homes.

“We are working closely with the Minister for Lands (Hon. John Rosso), and Housing and Urbanisation (Hon. Justin Tkatchenko), to make land titles available to first-time home buyers and owners who want to build their own homes,” Prime Minister Marape said.

“Land is scarce and a need.

“We will do what we can do for our citizens to live in a home, and go to work to serve our people.”

He said the Chief Secretary’s position was abolished to create a thinner and flatter public service structure to ensure secretaries of each department reported to their ministers and Cabinet directly.

The Government has appointed Ambassador Ivan Pomaleu as the new

Secretary to the Department of Prime Minister & NEC.