FIFTEEN people have been confirmed dead as villagers at Saki, Goilala in Central continue to dig through the mud and debris to recover the bodies of those buried alive in a landslide on Monday.

They were seven men, five women and three children. Nine of the bodies have been identified so far.

Goilala MP William Samb, who arrived at Saki village on Tuesday, said the priority now was to “recover and repatriate” the bodies. 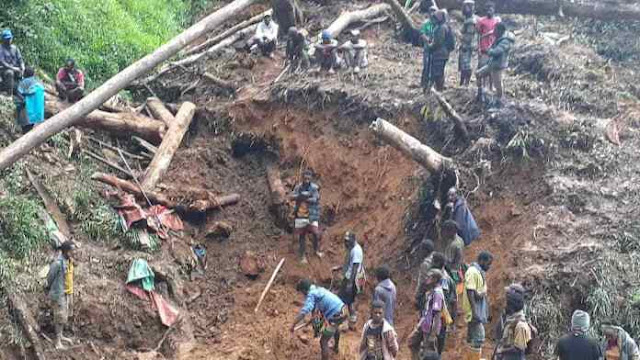 Those who perished in the landslide which happened between 4am and 5am are believed to be from Tolukuma, Sobu, Goura and Mondo villages in the Woitape local level government.

It is understood that some were alluvial miners camped at the foot of the mountain.

“Once we recover the bodies, we will have to repatriate them to their villages,” Samb said.

Families of the deceased are yet to be notified.

The bodies of a man and woman recovered on Tuesday were brought to a home near the disaster site.

Samb provided the locals working in shifts at the disaster site forks, shovels, a generator set and pump, chainsaw, lights and food.

“Due to the terrain, we are unable to bring in any heavy equipment,” he said.

“We can only provide digging equipment, the chainsaws are to cut through the trees that have come down with the landslide.

“The generator set will provide light and power to pump out water so it’s easier to dig into the mud.”

Villager Suri Siosuda who’s leading the recovery effort told The National that the bad weather was slowing down their work. But the villagers were trying their best to recover the bodies of their loved ones.

“After we dig (for a while), the weather changes. We see more rain and stopped digging. Then the area is covered with more mud and we have to start all over again.”

In a meeting with the people, Samb again stressed the dangers of alluvial mining in the area.

“You are cutting through the mountain side, cutting down trees that hold the ground together. You need to move to a safer location away from the cliff side.

“You cannot be digging through the mountain side than build your home on top. It is dangerous.”