8/04/2020 Headlines, PNG News
Kiunga, in Western Province today recorded its fourth COVID-19 case.
This one new case is among two others recorded in the nation’s capital, bringing the country’s total to 114 as of today. 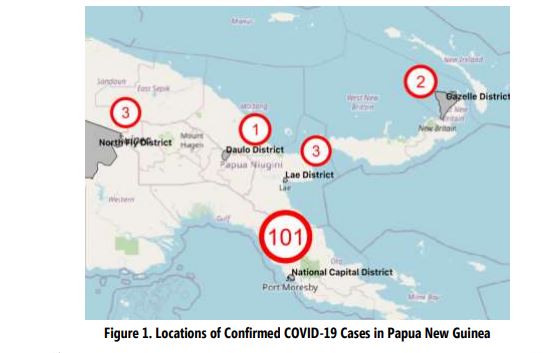 Controller of the National Pandemic Response David Manning said the person in Kiunga is in the designated isolation area for close monitoring, while contact tracing and screening of his immediate family and other close contacts is being carried out.
He said the NCD Surveillance Team is in contact with the two new cases in Port Moresby tonight and will be isolating and conducting contact tracing.
Mr. Manning said there is community transmission in the NCD and everyone must support the Government’s efforts to contain the spread in the city.
He added that clusters have been detected within the Port Moresby General Hospital and the Central Public Health Laboratory as a result of people not adhering to the standard infection control practices and not wearing the correct personal protective equipment.
Mr. Manning said there have been two deaths, 40 released from isolation, and 62 active cases.
He says of those cases, 16 are health workers including laboratory scientists, medical doctors, ward clerks, nurses and medical students- while the rest include government workers, students and inpatients of the Port Moresby General Hospital.
The nation’s capital currently has 104 COVID-19 cases, Western Province is on 4 cases, Morobe with 3 cases, East New Britain on 2 cases, and one from Eastern Highlands.
NBC News
Next :