In a historic move, a new coalition of Papua New Guinean Governors demanded the national government to deploy international law enforcement support and committed to implementing strategies to combat gender-based violence in their provinces. 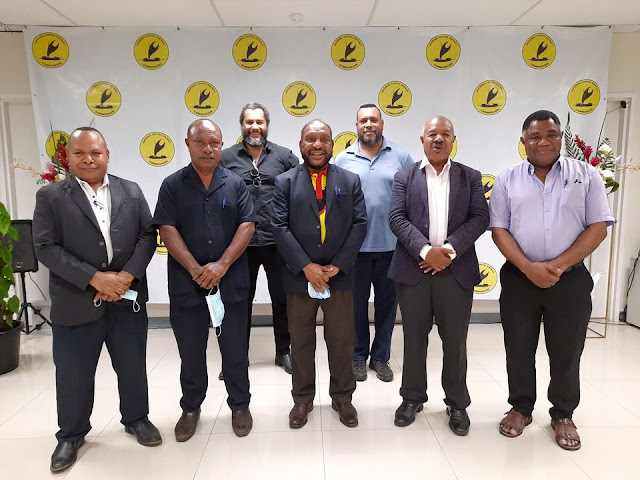 In a meeting led by Grand Chief Sir Peter Ipatas and hosted by NCD Governor Hon. Powes Parkop on August 26, Governors discussed the catastrophic impact that GBV is having on the country and agreed that violence against women and girls is the single greatest violation of human rights in the country and impediment to development.

The August 26 meeting was a direct follow up to the “High-Level Conference on Gender-Based Violence” held in Port Moresby at Parliament Haus on Monday 24th August chaired by the Hon. Governors Powes Parkop and Alan Bird.

Sharing his NCD GBV Strategy, Governor Parkop said that just being a woman or girl in the country, means living a life filled with risk and harassment, diminished opportunity and forced silence. Governor Parkop continued by saying that as Governors, the group bears the responsibility of speaking for the women they represent - and the women they represent have a right by the constitution of the country to equality of opportunity and a life without violence.

"While we acknowledge all the work done to date to address this crisis, it has not been enough to seriously reduce or eliminate GBV, nor the underlying root causes: inequality and discrimination.

We commit ourselves to taking all action necessary to reduce GBV and promoting gender equality, respect and partnership," he said.

Sir Peter said GBV had become a crisis in the country. He added due to lack of police investigation and prosecution, most GBV cases go no-where.

Governor Ipatas further stated he was confident all other members of parliament will support the agenda advocated by Governor Parkop.

As elected leaders of Papua New Guinea, representing our people and in pursuit of our National Constitution and its Goals and Directive Principles:

WE RECOGNIZE that GBV is the single greatest human right violation and development impediment for our country.

WE ACKNOWLEDGE all the work done to date to address this crisis but note that we need to do much more to seriously reduce or eliminate GBV and the underlying cause of it: gender inequality.

WE COMMIT ourselves to taking all action necessary to reducing GBV and promoting gender equality, respect, and partnership; and

WE HEREBY COMMIT ourselves to the following actions:

1. To come together and collectively establish the first ever Coalition of Parliamentarians Against Gender-based Violence.

2. To pursue this agenda at all levels including to reform our own behaviour and that of the institutions we lead, and to be role models to our colleagues, associates, staff, families, and communities and hold each other accountable.

4. To adopt and implement strategies to seriously address GBV in our provinces and resource them to respond appropriately to the needs of survivors of GBV and work to prevent GBV from occurring in the first place.

5. Acknowledging the deteriorating situation on GBV in PNG, we call on our fellow parliamentarians and the executive government to bring in international assistance to support our law enforcement agencies as an emergency measure to combat GBV.

6. To share results on what is working and what is not, to be accountable and to inspire and encourage each other by reporting back in November 2020 our results and progress, and thereafter on an annual basis.

7. To collectively join forces and lobby for the political will at the highest level.