7/23/2020 Headlines, PNG News
PNG COMMISSIONER of Police David Manning wants the Police Internal Affairs Directorate to immediately carry out investigations into the death of a young male in the National Capital District, allegedly as a result of severe beatings by policemen. 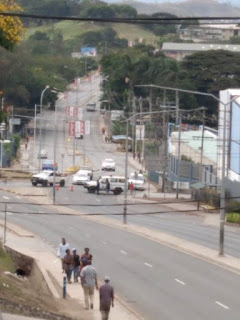 The young man was allegedly subjected to assault by policemen attached to the Six Mile Police Station and died last Saturday. Members of the Six Mile community protested on Sunday but were stopped by Police.
Commissioner Manning said he wants this and other claims of police brutality and abuse to be thoroughly investigated.
“We the police are not above the law. We are entrusted to protect life and property and to bring to justice those who break the law. Our duty is not to abuse our citizens. Every citizen, whether alleged criminals, suspects or otherwise, have their rights to justice in court.
"We are neither the judge nor the executioner. We are expected to use reasonable force only. We are not to continue assaulting suspects when they are handcuffed and pose no threat whatsoever either to policemen or to other members of the community,” Commissioner Manning said.
Mr Manning made this statement when confirming the relocation of the Police Internal Affairs Directorate from the Badili rental property to the Airport Police Post at 7 Mile in the NCD. He said the office is open for public to visit and register their complaints.
Mr Manning said, “For too long, internal issues and petty politics have denied justice and policing services to our people and it is time we put a stop to this. We do not have double standards in this country or two sets of laws and thus investigations whether of police officers or civilians must be carried out without compromising and delaying their outcome.
“I have ordered a senior officer of the Constabulary and his team to set the standards for the Constabulary going forward and they have already commenced this task. It is my intention to instil discipline, command and control that has been lacking in the Constabulary over the years. I expect full cooperation from the rank and file to ensure all outstanding files are looked into and ensure justice is served at the earliest.
“If it means I have to sack 100 police officers to improve the effectiveness, efficiency and discipline of the Constabulary I will do so without hesitation. It is better to have quality professional, committed and performing officers than ill-disciplined and uncommitted officers.”
SHARE THIS
Share it Tweet Share it Share it Pin it