7/06/2020 Headlines, PNG News
Commissioner of Police and Controller David Manning said he intends to rebuild and improve the Constabulary and make it not only relevant to the current situation but to be agents or stimulus for positive change, growth and advancement for Papua New Guinea as well.
Commissioner Manning made this statement during the Commissioner’s Parade at the Bomana Police College last Friday which was attended by Prime Minister Hon. James Marape, Police Minister Bryan Kramer, Health Minister Jelta Wong and other dignitaries. 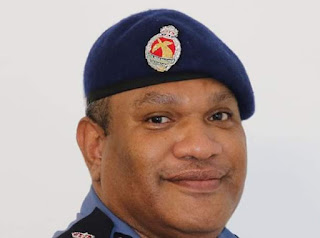 There were three companies on parade. The parade commander was Chief Superintendent Norman Kambo. This was Mr Kambo’s last parade as he is retiring soon after more than 40 years of service to the Constabulary.
Commissioner Manning said in his address to the members on parade that they can rebuild and improve the Constabulary when command and control is strengthened and improved and discipline tightened. He said command and control and discipline are peculiar features of the Constabulary and the cornerstone of its existence as a disciplined organisation.
Mr Manning said that his appointment signaled the ushering in of the new guard for the Constabulary. He said whilst embracing its rich and long tradition and police culture he intends to bring in a new era in strategic management of the Constabulary aimed at rebuilding and putting in place the foundation to improve the Constabulary as the people’s police service.
He said he wants to be seen as the people’s Commissioner.
“Members of the Constabulary, I want to be known as the policeman’s commissioner as well, committed to your growth personally as a human being and collectively as a member of the Constabulary. I am committed to the improvement of training and capacity building of our members and in the overall physical infrastructure development of our police service.
“Our greatest asset is our people. I will be investing or reinvesting back into our work force in terms of training, up-skilling of our human resource over the next couple of years. Whilst it is a mammoth task we need to put this organisation back on track again to advance to the next phase of our development.
“I want to work towards a well-equipped and professional police service that is committed towards working in partnership with the community in maintaining our law and order. I want to improve our investigations, detection of white collar crime and prosecution of offenders. At the end of the day I want to create a highly professional and accountable police service, one that we all will be proud of," Mr Manning said.
During his tenure he intends to:
1. Improving command and control;
2. Improving discipline;
3. Up-skilling and retraining of members;
4. Reintroducing and strengthening committee systems to allow for collective decision making;
5. Due recognition for performance and commitment with promotion and other rewards. With every promotion he will look at training and preparing members prior to wearing the rank and occupying the position;
6. Rebuilding police infrastructure including stations and barracks;
7. Improving and securing tools of the profession;
8. Comprehensive insurance for all members; and
9. Kick-starting a home ownership for members nationwide.
For the country Mr Manning wants to achieve a number of things and these are:
• To improve the justice system for victims of family and domestic violence;
• To look into sorcery related cases to prevent further abuse of women;
• To work closely with the Judiciary to ensure orders of the Courts are complied with, and will work closely with the Sheriff’s Office in that regard; and
• To improve and enhance police investigations.
However, the Commissioner said he cannot do this himself and needs the 110 per cent commitment from all 7,600 members of the Constabulary. He said he needs a collective effort and teamwork to move the Constabulary forward.
He said the task of rebuilding the police service begins now with each member of the Constabulary.
“All you have to do is to do your job and do it right. Remember your code of conduct, the one that you recited when each of you passed out from the Police College,” Mr Manning said.
The Commissioner concluded by reminding policemen about what was happening around the world. He said people have risen up against the police forces because of the abuses.
"I forbid PNG coming to that situation but that will depend on all you members and how you treat our people," Commissioner Manning said
Next: