6/18/2020 Headlines, PNG News
A trial for a judicial review of the process in which David Manning was appointment PNG Police Commissioner is set to be heard tomorrow.
This follows the Waigani National Court dismissal yesterday of an application that was seeking to dismiss the proceeding. 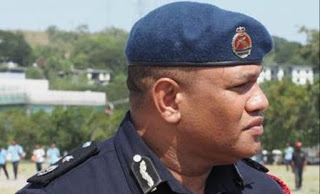 The application, filed by the State through lawyer Irene Mugugea from the Solicitor General’s Office and was supported by lawyers representing Manning and Police Minister Bryan Kramer, was heard by Justice David Cannings.
The application, filed by way of a motion, sought to dismiss an application filed by Sylvester Kalaut and Fred Yakasa that questioned the process by which Manning was appointed.
Ms Mugugea submitted that the grounds raised by the plaintiffs in the matter raised issues relating to processes taken by the Department of Personnel Management, but did not raise anything relating to the process taken by the National Executive Council.
Lawyer McRonald Nale, who appeared on behalf of Manning, told the court that the matter raised serious Constitutional questions and should be tried by way of a Supreme Court reference. Mr Nale, while making submissions, cited a case law that tried to convince the court to show that Manning, though was appointed Commissioner, was not head of department.
This, he said, made Kalaut’s application irrelevant.
However Justice Canning upheld submissions by Kalaut’s lawyer, David Dotoana, that the court was not wrong to have granted leave for review because according to the National Gazette published for the Commissioner’s post, the Commissioner was also the head of department.
Post Courier/ONEPNG
next :