6/11/2020 Headlines, PNG News
Papua new Guinea TREASURER Ian Ling-Stuckey told Parliament that the country’s economy has continued to be battered by the Covid-19 that has disrupted budget projections for revenue and costs in 2020.
Responding to questions from Kendrian-Gloucester MP Joseph Lelang in Parliament yesterday, Ling-Stuckey said the shortfalls in the revenue or even the overruns in costs were attributed to a fault of the Government.
Lelang, who is also the shadow treasurer, had asked a series of questions, including the projected loss of K2.222 billion in revenue to the State caused by the Covid-19 pandemic. 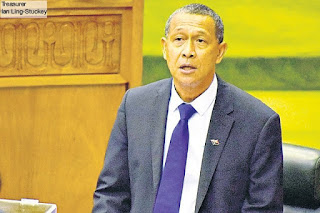 He also asked about the other causes of decline in revenue which were also caused by the Covid-19 and how much loss in revenue the State would expect in 2020 as a res ult and how that was going to affect revenue focus for 2021.
Ling-Stuckey said the projected revenue loss of K2.222 billion was a result of the pandemic.
“Our country is now placed in a contained scenario where we found ourselves in at this point in time consistent with the International Monetary Fund economic modelling and that is four months of slowdown from February to May for this year,” he said.
“We need to be aware as well that within the contained scenario, the third option, which is labelled as severe, that’s defined as 11 months of slowdown for the months of February through to December
“That particular scenario as and when we approach it, I will report back to Parliament to see whether there are any other effects to the budget when we come to it.
“In relation to the effects of Porgera mine, yes, the economic modelling took into account most of the effects on revenue for that particular project, as well as the other projects that exist in our country,” Ling-Stuckey said.
He announced that the Government had received K1.26 billion interest-free loan from the International Monetary Fund (IMF).
He said it was released into the Waigani public accounts for the Covid-19 response and other developments.
“The money would add to the foreign exchange reserves and be available to support and relieve the foreign exchange shortages in the country,” Ling-Stuckey said.
He said it was PNG’s fifth loan from IMF.
“The first four were called standby arrangements and these were filled with conditions,” he said.
“We also have to ensure that the money is spent in an accountable and transparent way and the Government, through various ministerial portfolios, have made that very clear,” Ling-Stuckey said.
“Getting this money was difficult because of PNGs poor economic record.
“We have been investing and rebuilding on our country’s credibility and we started this negotiation by engaging IMF in confirming our due diligence exercise.”
THe National/ ONEPNG
Next : Papua New Guinea Foreign Affairs Minister Pruaitch suspended
SHARE THIS
Share it Tweet Share it Share it Pin it