5/14/2020 Headlines, PNG News
PNG Prime Minister James Marape has denied speculations of any cabinet reshuffle.
But he hinted that there will be a minor reshuffle based on performance of Ministers in a review after one year in office. 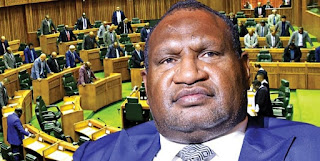 “There is a lot of speculation running of people saying there is a reshuffle. Not yet, based on performance as we approach one year in office, we see where, each ministers have different strengths and we see where best in reallocation of ministry.
“I give one year in office where we could assess based on the KPIs (key performance indicators) that we have given to each minister and their respective departments.”
Mr Marape said this after speculations and even a purported Gazettal Notice was circulated that Deputy Prime Minister Davis Steven was removed as Justice Minister and Attorney-General and takes over Provincial Affairs Ministry.
It was speculated that Pila Niningi was appointed Justice Minister and Attorney-General, but the Prime Minister rubbished these speculations as fake news.
“PNG, this type of fake and misleading post is doing its rounds.
“Facts are Davis Steven remains DPM & JAG and Ambassador Isaac Lupari remains acting Chief Secretary until Department of Personnel Management appoints a Secretary to PM department and Lupari’s contract is not renewed,” Mr Marape said.
“I have asked the Public Service Minister to expedite the process to appoint secretary to PM department.
“Folks believe in real news and not fake news, don’t be gullible to fake news.
“I don’t owe my life or career to few but majority of Papua New Guineans and in fullness of time and after legitimate processes, critical decisions affecting the country are taken thus far and it will be so into the future,” Mr Marape said.