4/27/2020 Headlines, PNG News
Only last month, an agreement  that marks the starting of a fantastic partnership between the Government of Papua New Guinea, the UNDP and the Asian Development Bank - ADB has been sealed. The signing of the Agreement between the Climate Change and Development Authority (CCDA) and United Nations Development Programme (UNDP) will bolster PNG's efforts to address the impacts of climate change in the country. 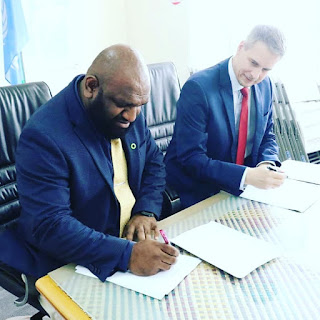 UNDP Resident Representative in Papua New Guinea UNDP Mr. Dirk Wagener said thanked the Government of PNG and CCDA for the agreement. "We have an agreement in place in ADB. But this is special as it is a grant agreement." Mr. Wagener added.

This is PNG's largest project in climate resilience so far. "The signing gives us the nod to go into the targeted provinces. We were worried when we should be getting it off the ground and now that the agreement is signed, we will now be travelling," CCDA Managing Director Mr. Ruel Yamuna said.

"We have every confident in UNDP's ability and valued experience in delivering projects in PNG," Mr. Yamuna said.

The BRCC project team together with UNDP should have been travelling by now into the targeted provinces but due to Coronno Virus SOE, it has been delayed. Hopefully in the next few months when UNDP is fully ready, the team should be out and about in the in the most remotest islands and atolls in Morobe, East New Britain, Manus, Autonomous Region of Bougainvillea and Milne Bay.