3/25/2020 Headlines
Thirteen passengers and the third level aircraft they were travelling in were directed to return to Port Moresby by Commander of the COVID-19 Joint Task Force and Police Commissioner David Manning for breaching quarantine protocols. 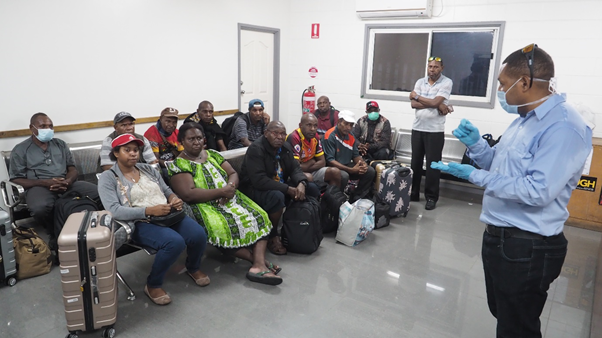 Mr. Manning commended Acting Deputy Commissioner Operations Donald Yamasombi and other police personnel who acted swiftly to send back the 13 passengers from Daru, Western Province.
The passengers, all PNG nationals had recently returned from Singapore and were subjected to the required 14-day quarantine period which was to end on Friday 27 March.
Mr. Manning said, “The standard requirement for all passengers travelling into the country regardless of the nationalities must go through the 14 days quarantine process and protocols before going back to the society.
“However, they by-passed the COVID-19 quarantine measures under the State of Emergency. They stayed for only 10 days after returning from Singapore and decided to travel out of Port Moresby to Daru without completing the quarantine checks.
“On arrival at the Daru airport, the plane was directed to return to Port Moresby with all passenger on board by police and health officials in Daru.
“They are now isolated in Port Moresby and a team of specialist will be investigating this matter to establish the facts before we take necessary actions. This incident now gives us a level of confidence on the coordinating mechanisms that are in place to combat COVID-19,” Mr Manning said.
Mr. Manning further said that for the information of the public every person that has returned into the country since 6th of March are being kept under surveillance.
He said the COVID-19 National Operation Centre (NOC) is closely monitoring the situation around the country. The call centre at the NOC has thus far received 700 calls on the toll free number 1800200 and the Rapid Response Unit is now attending to them.

Picture: Senior Sergeant Tumbe Sam processing the 13 passengers who were returned back to Port Moresby from Daru at the Jackson airport terminal yesterday.