Many in the Pacific who’ve never seen it before take one look and say; “It’s football in the water” - but its proper name is “SpiderBall”.
And rather than football, it is actually a modified version of water polo, the Olympic sport that is little known to most in Vanuatu.
Most importantly, over the past 18 months, it has changed the way boys and girls play together on Efate, by offering a game which allows them to compete equally and without fear of physical harm.
“It's good for boys and girls because before, the guys were afraid of playing with a girl or a girl is afraid to play with the boys,” says SpiderBall Instructor Robin Wotlelen. 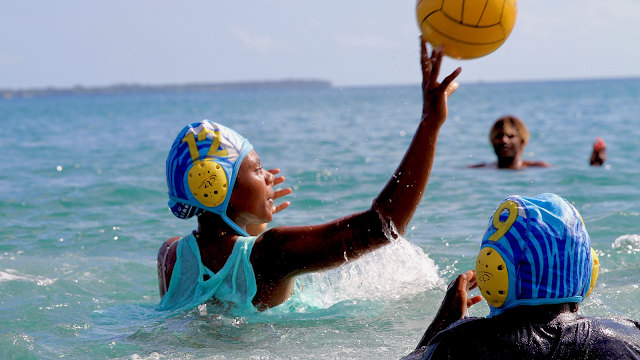 “SpiderBall is good for them coming together and making happiness together.”
The Australian aid-supported program, run by Wan Smolbag in partnership with Vanuatu Aquatics, Swimming Australia and Water Polo Australia is designed to do that, and a whole lot more.
While water polo is usually played in an Olympic-sized swimming pool, there aren’t any in Vanuatu, so Black Sands Beach and SpiderBall are proving popular alternatives.
After school, dozens of boys and girls of all ages can be seen streaming onto the beach from nearby villages before stretching, putting on special water polo caps and playing beach games to create a spirit of friendship and co-operation.
Instructors have special floating goals that are held in place by weights that are set up about five metres out from the shoreline.
When the time is right, boys and girls are evenly distributed across two teams and the rules, which reward “sharing” between the genders, are explained.
And then it is game on.
But with no sideline or pool edge, the SpiderBall instructors have their hands full.
The whistle gets a workout, but the spirit is one of fun and even those unhappy with the official decision laugh it off and play on.
“SpiderBall is a game where you make fun and meet new people,” Robinson says.
“It's good because when you go you have a friend in a different community or when you go in a different place or different village of different street you will have many friends because water polo unites people together.
The SpiderBall initiative is about much more than simply introducing water polo to the Pacific, however.
It is a carefully designed sport for development program that has a series of key messages integrated into each game and a broader program.
They include the promotion of equal access by telling participants; “Swimming is everyone’s business” and “If you can do it, I can do it too”.
Developing leaders is also a priority through encouraging responsibility and inclusive behaviour.
Only 13% of boys and 47% of girls surveyed before participating in the program felt they were good leaders. But upon completion of the SpiderBall program, every single participant said they’d grown into a good leader.
“I think the biggest change we saw was in the girls in the class,” says Wan SmolBag’s Jodi Devine.
“A lot of them were more confident by the end of the program and both boys and girls were able to work together as a team to achieve a common goal.”
Nancy Miyake is the Regional Program Manager of the highly successful Let’s Swim program and says what is learned in the water winds up in the wider world.
“It’s important for all voices to be heard when making a decision that impacts everyone,” she says.
“When boys value women, they will value their voices, their ideas, their opinions, their feedback.
“SpiderBall creates an equal playing field by making girls just as important as their male teammates. It creates an environment where the team can only succeed if everyone is included.”
And while leadership, equality and social change remain challenges for the whole world, when you wrap them inside in a game of SpiderBall, they seems neither revolutionary nor challenging.
“There are so many positives to the program,” Jodi says.
“The kids and teachers get fit but at the same time they are learning how to respect each other’s space, how to work as a team and also about the difference they can make in their own communities as leaders. “
SpiderBall might result in a generation of great water polo players, but it will definitely produce a generation with better leadership and a better understanding of how it takes a whole team to win; at water polo and life.