Dr Marat, the Member for Rabaul, was the Attorney Gerenal in 2009 when IPIC was negotiated and obtained. 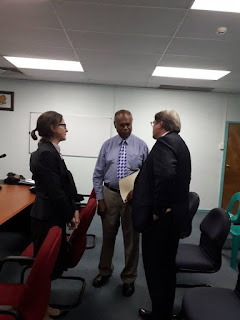 He told the Union Bank of Switzerland or UBS loan inquiry on Friday even though he was the principal legal advisor to the National Executive Council, he was not deeply involved in the deal apart from being present in NEC.

Dr Marat said he started raising questions and the whole arrangement led to his sacking.

The Commission of Inquiry had asked Dr Marat to appear so a date could be set for him to give evidence.

Chairman Sir Salamo Injia took note of what Dr Marat said and gave him time to prepare his full evidence on the IPIC deal which he'll give on 18th May.

The IPIC deal relates to the sale of the States' share in Oil Search to fund its equity in the PNG LNG project.

The Commission of Inquiry is investigating whether any laws were broken when this deal and the UBS loan were negotiated and obtained.

Meanwhile thousands of documentary evidence relating to the UBS loan and related matters from the Department of Treasury were presented to inquiry on Friday.

Tiffany Nonggorr, lawyer representing Treasury Secretary Dairi Vele, produced the evidence in hard copy and in a flash drive before the inquiry.

She told the inquiry there are 7000 documents in seven volumes compiled between the years 2008 and 2014 which covered the PNG LNG project, UBS loan and the sale of the State's shares in Oil Search to the International Petroleum Investment Company.

The documentary evidence includes a list of witnesses who played a role in the transactions.

The evidence has been summarized in 38 pages.

This matter will return to the Commission of Inquiry on 3rd April.