PNG's PM warns of risk in deciding on Bougainville too soon

2/25/2020 Bougainville News, Headlines, PNG News
Papua New Guinea's prime minister has warned of the risks in having Parliament deliberate on the Bougainville referendum result too soon.

James Marape, speaking in New Zealand, where he is on a four-day visit, has reiterated the need for time to allow PNG to process the result. 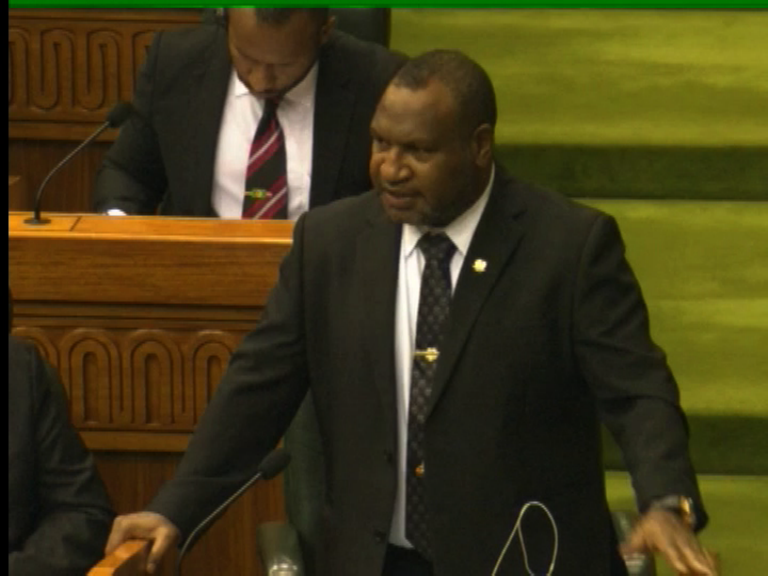 An overwhelming majority of Bougainvilleans voted for independence in their recent non-binding referendum. The result requires ratification by PNG's national Parliament to come into effect.

First, Marape said his government must conduct extensive consultations, for which there is no time frame given. But he has hinted at the overall process taking up to five years before the national parliament ultimately decides on Bougainville's future.

Marape said there are some major issues to be worked through, one being the lack of a provision in PNG's constitution for any part of the country to follow Bougainville's path and look to secede.

However, the Bougainville Peace Agreement, which provides for the referendum, is embedded in the national constitution, and Marape said his government would adhere to that.

Earlier, PNG's Minister for Bougainville Affairs Sir Puka Temu said that if the consultations determined that independence was the right path for the currently autonomous PNG region, parliamentarians would have to agree and build the constitutional provisions for independence. But he, Marape and others in their government are determined to ensure other parts of the country didn't break away from the PNG state as a result of the Bougainville outcome.

Another major issue is ensuring Bougainville's economy, infrastructure and public services are brought up to scratch.

“For us as a government, we're committed to assisting Bougainvilleans building their enabling infrastructure, making some investments in areas like agriculture, fisheries and forestry,” Marape said.

He argued that it was essential that Bougainville was able to rebuild and to eventually stand “on their own two feet”.

“What's the use in talking about independence or autonomy when you are not economically strong?"

“So in between this period in which they've voted, until the time in which the matter comes back to Parliament - if it is one year or two years or three years, as I envisaged possibly five years - it's for both sides of PNG and Bougainville to work side by side. We'll help rebuild their economy.”

Waigani's idea of how long this process should take may be different to that of Bougainville's.

Bougainvilleans waited 20 years since the end of their civil war until last November's referendum in which they showed great unity and peaceful purpose. But their patience is set to be tested again.

The chairman of the Bougainville Referendum Commission's Committee on Referendum Security, Patrick Nisira, admitted during the historic poll that it would be the period following the announcement of the result when problems could be expected.

Nisira warned that frustration might build up with the national government and the Autonomous Bougainville Government if they did not move quickly to facilitate the result.

Accepting that there is a risk of Bougainvilleans becoming restless if the matter dragged on without being seen to progress, Marape said if Parliament deliberated on the outcome too soon there could also be problems arising.

“So, in the next one or two years we'll be interfacing with them. It might not be five years, it might be earlier than this. But as I said, we also run the risk if it goes earlier to Parliament, Parliament might reject it and then Bougainville will also be up in arms again.”


Juvenile Posing with Gun on Facebook arrested for car robbery