This article is written to shed some light on reasons why there is intense and unusual flooding in some parts of Papua New Guinea  as is being reported very recently.
It would be absurd to blame effects of climate change as being the sole reason for sudden and unprecedented flooding in certain parts of the country such as this case here in the Highlands.
In fact, we, humans are abetting and inducing this change through what is known as land use changes; especially from wholesome vegetation clearance. 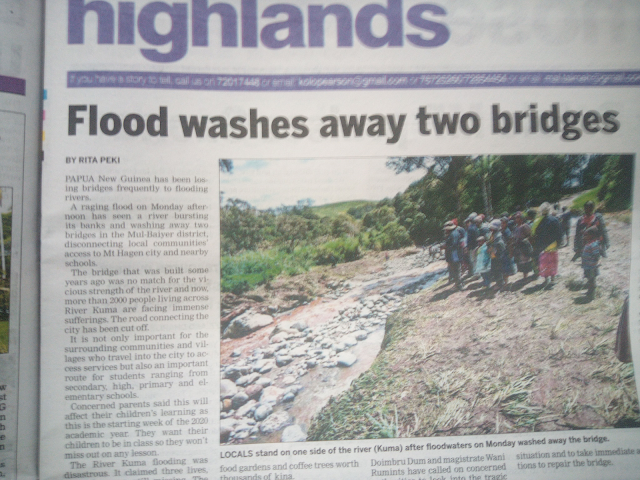 This is because vegetation including plants of sorts; trees, grass, vines, creepers on mountains and hillside sides act as buffer and cushion assist to hold back runoff ( surface water flow ) and derail accelerated flow of water into streams during a rainfall event. Trees and vegetation also help to percolate a lot of the water into the ground- water that would have made its way straight to the rivers had there been no vegetation. In fact, water that goes into the ground (groundwater) moves at a slower pace than surface run-off.
However, of recent , vegetation clearance including removal of trees is happening at a much faster rate than before due to population pressure on renewable resources such as trees for varying purposes ; gardening, logging, plantation Agriculture ( farming ), road construction, mining ,bush fires etc everywhere in the country. This is creating a very dangerous scenario because what will happen is rainwater will now flow on a freeway, with high velocity (speed) and increasing volume because there is nothing to reduce the strength and absorb the volume.
We have to be very careful and considerate of this; especially removal of trees and vegetation clearance from mountain slopes, water catchment sites and high altitudes because this will lead to quick succession of water than normal in less time and leading to unprecedented flooding events and swarming of side banks, food gardens and even loss of life and property and even collapsing and washing away of bridges. This is because the river channel morphology; especially in the headwaters is meant to cater for only a certain volume of water and if so much is entering in less time , it simply increases the velocity , force and strength of the water, thus the destruction along the water way.
During heavy and continuous downpour, the infiltration capacity of soils is quickly exceeded, leading to surface run off-this is referred to as Hortonian flow in Hydrological terms. During such flow, rivers quickly become braided or flooded, carrying with it debris (logs, fallen trees, branches) and the bed load (silt, sand, mud, soil, rocks, pebbles) etc. In fact, so much sediment and debris is eroded and moved from cleared sites by the water current than normal and deposited into the river channels. What can happen now is the sediments will fill up the river channel (water way) leading to over flooding, incisions, undercutting and collapsing of sidebanks and overland flow; causing so much destruction.
The WET season in its peak at this time of the year can add to the statuesque; hence, authorities need to be considerate of this nature’s fact when planning for civil works such as roads, bridges, and culvert or drain works. People living within the headwaters and water catchment areas have to be informed and warned about the dangers of such as they , themselves will create their own doom and gloom or peril or for the people downstream. The urban storm water drainage systems such as that of NCDC which flows on impervious surface is one such example.
In fact, Article 3.3 and 3.4 of the Kyoto Protocol have identified Land Use and Land Use Change from Deforestation (LULUCF) as being the main cause of CO2 increase globally and the cause of habitat destruction, threats to extinction of flora and fauna and dysfunction of the workings of natural cycles such as the Water Cycle, which governs rainfall events. Hence, when we clear vegetation, we are already inviting unforeseen events that will bring devastating consequences; including loss of lives as we are hearing, seeing and reading about.
***
The Author is an Environmental Scientist and specializes in Surface & Groundwater Investigations. He is also a volunteer on Travel4Green (T4G) PNG project (www.t4gpng.org), advocating for climate change, forest conserving and carbon sequestration. Email: kimiafakerry@gmail.com