1/14/2020 Headlines, PNG News
Illegal street vendors have taken over the bus stop and shopping areas around the vicinity of Gordon's.

Activities such as drug peddling home brew consumption and other forms of petty crimes are rife where the perpetrators take cover of the street vendors. 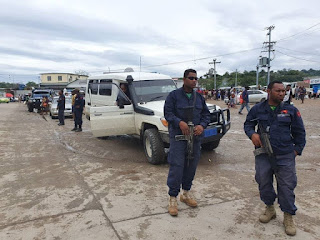 Mr Mosinakave encouraged the vendors to comply with NCDC regulations which include the need for them to form small associations, depending on their produce and trade to be eligible for space allocations within the newly constructed Gordon Market.

He said the vendors now selling their produce inside the Gordon market have complied with NCDC regulations to form associations specializing in the sales of soft drinks, fresh garden produce, fish and meat products and so fort.

He said police will continue to remove such illegal markets to ensure that the public are able to move about freely, without being harassed and intimidated by those who take cover from these street vendors.

Inspector Mark Mosinakave briefing units before going out for the task