1/22/2020 Bougainville News, Headlines, PNG News
The Bougainville Referendum has been declared as petition-free following the end of the 40 day petition period which ended on January 20, 2020.

The Bougainville Referendum Commission in a statement said that there were no complaints lodged during the 40 day petition period. 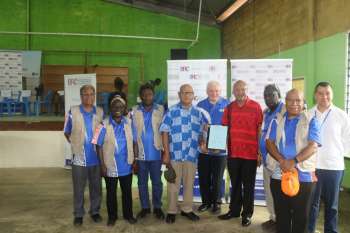 “Our sole purpose was to deliver, according to the law, a democratic and credible answer to the question of ‘independence or greater autonomy’ for Bougainville as voted for by Bougainvilleans,” Mr Tsianai said.

“We are glad that this electoral process is now complete, and that it has proven to be a credible one for all interested parties, as well as international and domestic observers.”

Mr. Tsianai said the absence of petitions confirms the BRC’s stand that the referendum was conducted to international standards, which provided a result which the governments of Bougainville and Papua New Guinea can trust.

“We now wish the two governments all the best as they commence the next steps of the Referendum process as defined by the Peace Agreement: a period of consultation and then a final ratification by the National Parliament of Papua New Guinea of the political future of Bougainville.”

The 40-day petition period is a normal part of any democratic electoral process and is provided for in the Organic Law on Peace Building in Bougainville, Autonomous Bougainville Government and Bougainville Referendum, 2002. A petition can be lodged by a voter, or by the BRC itself.

Meanwhile, the BRC will be meeting tomorrow in Port Moresby to begin the process of decommissioning over the next three months, and ensure all outstanding payments are done and assets and finances accounted for and dispersed to funding agencies and/or the two governments.

It is expected that a full report will be provided by the BRC outlining lessons learnt for future elections in PNG and Bougainville and the financial aspects of the BRC’s expenditure.

“The Commission will continue to operate according to its charter, including being professional and transparent,” said Mr Tsianai.

“We were provided with funds from the two governments and the international community, and we continue to be accountable to those bodies during this wind up process,” Mr Tsianai said.

After the three months, the Commission will revert back to a transitional Commission co-chaired by the two Electoral Commissioners, and the Chief Secretaries of the governments of Papua New Guinea and Bougainville.


Massive Reduction by PNG Govt on Tariffs on Used Cars