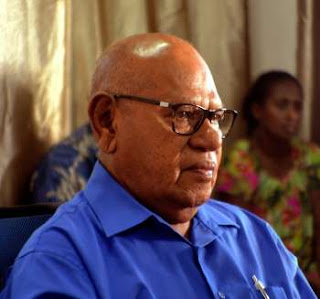 Firstly, the Special Mining Lease Osikaiyang Landowners Association (SMLOLA) was an entity established under the controversial Bougainville Copper Limited (BCL) regime, which mistakenly placed landowners into individual blocks. This is in fact inconsistent with the traditional land inheritance system whereby land is owned by clans and families. The ABG has started the process to rectify this grave past mistake with the rejection of BCL’s licence over Panguna, thereby deeming all current mine affected landowner associations, including SMLOLA illegal, null and void.

So while it is true that RTG are the joint venture partner of SMLOLA as they have confirmed, I would like to confirm SMLOLA have no legal rights over Panguna and cannot enter into any legally binding agreements relating to Panguna. I am happy to advise however that the ABG will be assisting the true and genuine landowners to ensure proper social mapping is carried out in order to establish new legal landowner associations and entities.

Secondly, as per a media statement released from my Office on the 23rd December 2019, I would like to re-confirm and reiterate that the below RTG executives currently still have a travel ban on them, preventing them from entering Bougainville:

I also re-confirm and reiterate that this travel ban will not be uplifted under any circumstance. Whilst there was a travel ban into Papua New Guinea, it has recently been uplifted due to RTG’s lies and deceptions to the PNG government and immigration department about their purported involvement in the Mt Kare project – a project that the world knows it will not succeed. It is therefore concluded that RTG have taken advantage of the fact that both the PNG and ABG operate independently of each other and do not always consult each other on foreign companies, and that RTG’s interest in the Mt Kare project is merely an expensive ploy and deceptive tactic to be able to have a presence in PNG and access to their only real interest – the financial rewards of the Panguna pit.

RTG and their executives should be totally and utterly ashamed of themselves for their corrupt, disruptive and divisive behaviour. They have tried to take advantage of our landowners and people and have shown a complete lack of respect for government authorities. RTG have completely misled the markets for their own financial gain and convenience. The ABG will not rest until all RTG and their executives are banned for life from Bougainville and Papua New Guinea.

As it is my duty to protect the people of Bougainville from immoral charlatans, I appeal to the ASX, TSX and OTCQB, as your duty to protect current and potential shareholders, that you perform a full investigation into RTG Mining and their executives and their misconduct. My Government would be more than happy to assist you with any enquiries relating to RTG and their activities whilst in Bougainville.

For current and potential shareholders and financial markets, I hope that this clears up any confusion or misunderstanding on RTG Mining’s position in Papua New Guinea, Bougainville and Panguna.