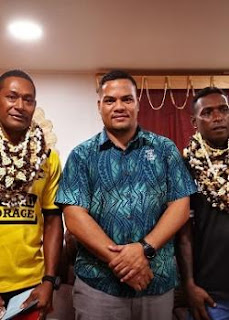 Epeli Kamikamica and Samuela Dolesau were imprisoned for life for the murder of a Chinese national in April 2011.

The two Fiji nationals, who were crew members of Chinese fishing boat, were convicted for murder and sentenced to life imprisonment. At the time of their conviction the penalty for murder was mandatory life sentence, without the prospect of release as there is no parole law in Tuvalu.

Announcing their release, Tuvalu’s Minister for Justice and Foreign Affairs, Simon Kofe said in 2014, Parliament amended the Penal Code to reduce the penalty for murder from life imprisonment to a minimum 15 years with the court having the discretion to set any penalty above 15 years.

“Unfortunately this amendment did not apply retrospect to cover the four prisoners serving life (Epeli, Samu, Mark and Pato). In my previous role as Senior Magistrate I would visit the prison to review living conditions. It was during these visits that I came to know the prisoners, said Minister Kofe.

In May last year, Kofe tabled an amendment to the Penal Code to allow for the High Court to resentence the four prisoners serving life sentences under the new law. Unfortunately the government at the time opposed the bill.

“After my amendment bill was defeated in the May session I decided to move a motion to have Epeli and Samu deported to Fiji in the final session of Parliament in June. The motion was supported and passed by Parliament. Unfortunately the resolution to deport was not implemented immediately.

After Minister Kofe joined government in the September election, and securing the Justice portfolio, he re-tabled the amendment Bill to allow the prisoners to be resentenced.

“Earlier this month Cabinet decided to implement the resolution of the last Parliament to deport Epeli and Samu. Cabinet opted to invoke the Governor General's power of mercy to pardon and repatriate the two prisoners, explained Minister Kofe.

“Today, on Christmas Eve, Epeli and Samu will reunite with their families for the first time since 2011, said Minister Kofe after farewelling them before their departure to Fiji.