All ballot boxes and materials have now been received, checked and registered at the BRC Count Centre with the exception of just one postal ballot box in Buka which will be sealed and transported to the Count Centre shortly after all polling officially ends today. 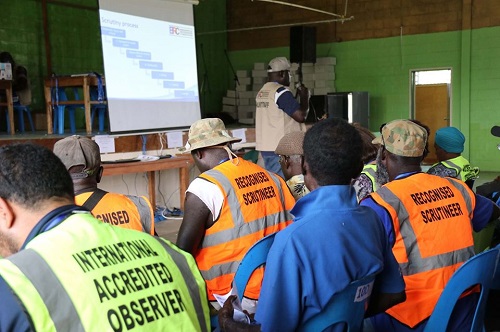 This morning nearly 100 observers, scrutineers and media received their final briefing on the scrutiny process so that they are clear about their roles and responsibility in ensuring the process will be transparent and credible.

Chief Referendum Officer Mauricio Claudio said all were to be congratulated for the ongoing peaceful environment and engagement in the process.

“We are at eve of final step of the Referendum process – the scrutiny of ballots. The BRC is ready, our staff are trained and are ready to do their job with accuracy and transparency,” Claudio said.

The Commission has previously agreed that it will make a single announcement of the result once it is complete, and not release a progressive count.

“We’ll complete this final stage as quickly as possible, but as slowly as is necessary to ensure everything is by the book, and allows the scrutiny of observers, scrutineers and the media.”

Starting shortly after 6pm tonight, the Count Centre will operate 24/7 with staff working in three shifts of eight hours.

Over the next few days 249 ballot boxes will be opened, with verification of seals and materials against Referendum Journal – already completed and checked by Presiding Officers and Assistant Returning Officers at the regional centres.

“Only after we are absolutely sure that we have the correct number of used, unused and spoilt ballot papers will mixing of all ballot papers take place and the counting begins. This is best international practice to ensure the secrecy of votes.”

“People are excited, and there is an atmosphere of peaceful anticipation. We know that people have waited 20 years for this vote.