11/05/2019 Headlines, Rugby League, Sports, Tonga News
As Australia worked through the seven stages of grief (with heavy doses of anger and denial) following Saturday’s defeat at Eden Park, Tonga experienced rugby league deliverance – a seminal, life-changing moment of shared hope in which the giant killing team had for the first time defeated Tier 1 heavyweights Great Britain and then the Kangaroos in consecutive weeks. 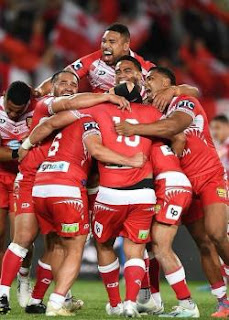 With multi-coloured floral lei’s draped around his neck, Tonga’s talisman Jason Taumalolo told the media it was bigger than winning the NRL premiership with the North Queensland Cowboys. His controversial decision to defect from New Zealand to Tonga for the 2017 World Cup had borne the sweetest fruit, etching him in folklore.

In the Channel 9 commentary box, a disoriented Andrew Johns tried to interpret the new reality that now lay beyond the romance of the underdog: “I thought they’d fall in a heap but to their credit, they got a taste and wouldn’t go away.” Johns posed the question of the hour. Will the next generation of Tongans in western Sydney pledge their allegiance to Tonga? He provided his own answer: “This is a huge turning point.”

The journey from prey to predator has been a long one for Mate Ma’a Tonga. In October 1999, 4,500 true believers watched a hapless team get crushed 74-0 by New Zealand in the last Test to be hosted at Auckland’s Carlaw Park. What a difference 20 years can make.

For Tony Collins, one of the world’s leading rugby league social historians, the victory was unprecedented in the game’s 124-year history. “It’s the biggest upset in the history of international rugby league without a doubt,” says Collins. One profound impact of the victory according to Collins will be striking a decisive blow against rugby union’s stranglehold on Pacific Islander hearts and minds.

The Tier 1 nations in rugby union have continued to stockpile and hothouse the best Pacific Island talent, but the growth in stature of Tonga, Fiji and Samoa has meant league has become the new connective tissue for the region.

“The 2019 Rugby World Cup was very disappointing for the Pacific island nations, coming off the back of the disastrous World Rugby decision to exclude them from their planned international competition,” says Collins. “2019 may be the year that tips the balance towards rugby league.”

Supporting this prediction is the announcement that Tonga will head its own pool in the 2021 World Cup to be held in England. The organisers for the first time will be able to conduct a draw with four pools headed by Australia, England, New Zealand and new Tier-1 country, Tonga.

Collins notes rugby league’s rich history in inclusion has served it well and the changes to national qualification rules at the 2017 World Cup has served as a catalyst. “The rise of Tonga to a Tier 1 nation is testimony to rugby league being the first sport in the 21st century to recognise and be sensitive to shifting identity and allegiances.”

Tonga’s rise has meant for the first time international rugby league is challenging State of Origin as the premier form of the game. “Origin has always been the pinnacle but the passion generated by the Pacific nations is now equivalent,” Collins says.

David Lakisa, a Samoan-Australian PhD candidate at UTS says Tonga’s win confirms his latest thesis: managing Pasifika diaspora in the NRL. No longer are the Pacific community dialling down their culture to fit in. Now it is being accommodated and respected.

“Our culture is now a central part of the game and the rise of Tonga has confirmed that,” says Lakisa. “The player prowess is now combined with cultural expression – post-game prayer circles, players looking heavenward for inspiration, contract decisions made by parents, broadcasters timing in cultural performances and fans fervently singing the anthems of both teams.”

The Pacific revolution began with over representation in grassroots junior leagues across Australia and New Zealand which has led to a 48% Pacific Island and Maori representation in the NRL in 2018. Now freed up to play for their ancestral countries, these disciplined and battle-hardened NRL players have driven Tonga to its famous victories.

Yet despite Tonga’s on field heroics, for Lakisa, off the field it was business as usual. The Channel 9 commentary panel had no Polynesian input.

“For a Pasifika fan, there was such a difference between the commentary of the Fiji-Samoa game which featured Samoan Monty Betham compared to the Australia-Tonga game on Channel 9 which had only the Anglo lens. We have to start valuing the Pasifika contribution in commentary, coaching, technical, executive and board roles for the real revolution to happen. We have so much more to offer.”

Rugby league has been built on a century of hatred and feuds, and perhaps the greatest contribution of this band of disruptors has been to lighten up the game. Tongan centre Konrad Hurrell summarised it best: “We don’t have much but we have so much love.”

Tonga’s win on Saturday night touched the basic things that make us human. Using stars, winds and currents this ancient seafaring nation once navigated to every corner of the Pacific before the modern world intervened and their greatness waned. Through the platform of rugby league, the Pacific people are again on the move and this time the wind is behind them.
SOURCE: THE GUARDIAN/PACNEWS


PNG Kumuls confident ahead of match against Fiji Batis