PNG Kumuls confident ahead of match against Fiji Batis

11/05/2019 Headlines, PNG Kumuls, Sports
The PNG LNG Kumuls are confident heading into the match against their opponents Fiji Batis in the second leg of the Pacific Cup Test in Christchurch on Saturday.

Fiji is fielding a strong side with plenty of NRL experience. 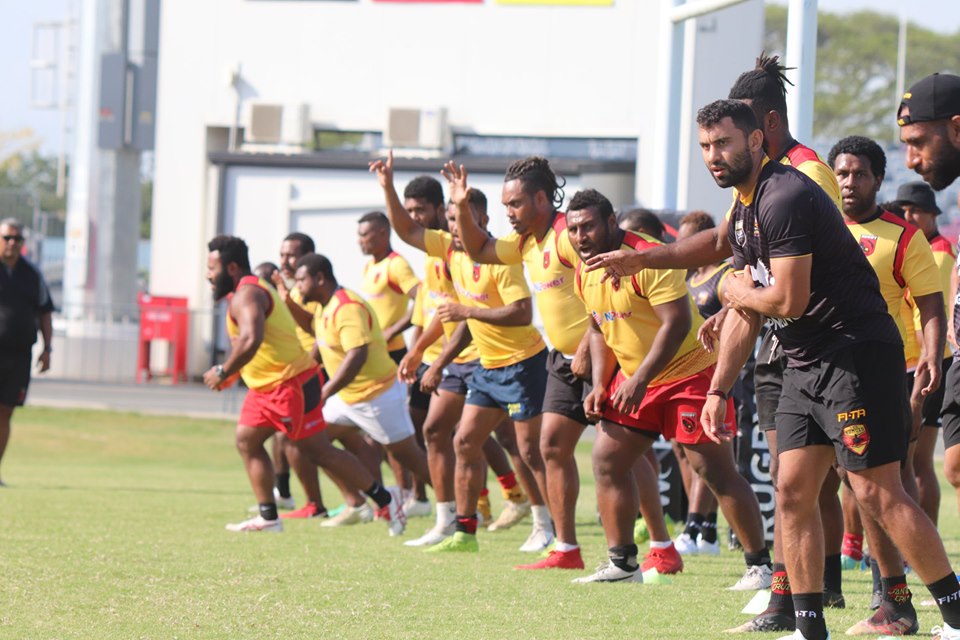 However, PNG Kumuls assistant coach Stanley Tepend said: “I am confident with the boys as they were really good in the one-week camp.”

He said training had been solid with the players jelling together. There are no injury scares and every one (players) is looking forward to the game.

“We watched a video of the game between Fiji and Samoa yesterday and they had a good result. However, we are not too worried about that game,” he said.

“I think we are just concerned about getting ourselves right for the game. We did a lot of field stuff this week and finished off with a bonding session on Saturday.”

Tepend said the PNG Kumuls will be playing two sessions, one on Wednesday and the other is a Captain’s run on Friday. It is mainly going to be based on touching up on small areas for the players.

He added that Stanford Talita is still on a learning curve after joining the Kumuls from the Digicel Cup competition.

“He was involved at the recent World Cup Rugby Nines and if he gets the chance, he will not let his team mates and the country down,” he said.

Tepend also said the Kumuls will be pinning their hopes on Alex Johnston who has a lot of experience playing for South Sydney Rabbitohs in the NRL.

He said Johnston plays in the best competition in the world week-in and week-out, so he brings a lot of experience to the side.

“He has been really good for us.

It is a very big plus for us having Johnston and other NRL players including Justin Olam who will bring the firepower in the back line to play alongside with the other players,” Tepend said.

“We have watched Fiji’s game and they did a lot of off-loading.

Samoa also had a lot of NRL players more than Fiji so we will be looking to cut down on that.

They did also have 44 missed tackles but they also scored 40-plus points so we will have to work in the next couple of days to use that to our advantage.”

Tepend, who is confident on the former SP PNG Hunters players, said Albert brothers, Wellington and Stanton, Enoch Maki, Luke Page and other players have been in the Kumuls system for a while so it doesn’t really affect them.

“We have been training hard with some tough running sessions in a week and we finished off with a lot of ball work and defensive work, so we are really ready to play this weekend,” said PNG Kumuls captain Rhyse Martin.

He said he is hopeful his boys have more possession of the ball against their opponents.

“They have a lot of big bodies and skillful players and can create a lot of opportunities to off-load so we need to be good in this area.”

“This is going to be a massive game for us and to win, we need to play as a team with the kind of spirit we’ve had in camp since day one,” he said at the Jackson International Airport in Port Moresby.

“It will be a tough game. We are prepared to face the bigger Fijians who can cause problems with their offloads. They have big, mobile forwards so we’ll need to contain them.

“We are aware of the threats they pose after watching them on video last night (Sunday). We will need to be on our game.”

“This is where we should capitalise on to score points and overcome the opposition,” Martin said. “We have Luke Page joining us in Brisbane. He is an experienced forward so he’ll add firepower to the side.

“It’s been a good week of preparations. We are all excited and looking forward to the game.”

Kumul player Moses Meninga is confident that his fellow Kumuls forwards will get the job done against a star-studded Fiji outfit.

“I trust them. Our teammates will be relying on us to provide the go-forward for our backs so we’ll try, as much as we can, to lead from the front,” Meninga, a teacher by profession, told The National yesterday before leaving for New Zealand.

“We have to get our minds ready for big games like this, not just training, but preparing our mindset as well.”

“Our main focus since we came into camp has been on defence and dominating the ruck area,” he said.

Meninga said the 20-man squad had a lot of training sessions since arriving camp in last week.

When asked about Tonga’s 16-12 win over Australia last weekend, the SP Hunters skipper said: “We call ourselves ‘one solwara’ boys and this win is definitely a boost for all the second-tier countries in the Pacific.”