11/20/2019 Headlines, PNG News
About K1.8 billion is owed to the Internal Revenue Commission, IRC, in salaries and wages tax.

IRC records show that a good number of group tax employers which include companies, entities and SOE’s have failed to remit their collection of their employees’ salary and wages taxes collected every fortnight to IRC. 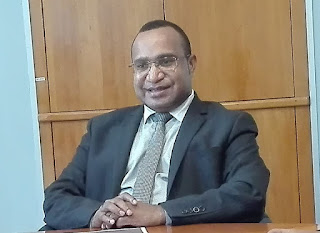 Salary and Wages Tax is deducted every fortnight from employees’ pay, and by law the taxes should be remitted straight to the IRC by employers.

The current arrangement is that employers are to remit the funds to IRC on a monthly basis.

But many employers have failed to do that, and attribute it to struggling financial situations.

Koim says because of administrative challenges in collecting all employees salary taxes, which is a huge administrative work to do, there’s a withholding arrangement that employers withhold their employees’ salary wages tax and at the end of every month wired it to IRC.

But because the money is sitting in the employers’ accounts, Mr Koim says they can easily use it to their advantage, which he says is like stealing from their employees.

Mr Koim says whilst employees are complaining about the high taxes they pay to the government through IRC, whether or not their employers are remitting their salary taxes to IRC is something they don’t know.

Failure by companies to pay up their Salary and Wages Tax on time also results in interests incurred as penalty fines added to their base tax, which has become problematic for many companies.

Mr Koim says employers that have outstanding salaries and wages taxes are now given an amnesty from January to March 2020.

During the amnesty period if employers pay up their base tax, IRC will have 100 percent of their penalties written off.

The IRC Commissioner General says the government is aware of the tough economic times the country is in so it is giving businesses time within the three months amnesty period to pay up.

He adds there are a large number of companies in the logging industry and State Owned Enterprises that are still to pay up their fair share of salaries and wages tax and sounded a warning to them to pay up.

Koim says after the amnesty period ends in March 2020, IRC will use available laws to severely punish disobedient companies.

While there are many questions being asked by Papua New Guineans regarding tax thresholds and when the government can ease the burden on high salary taxes, Mr Koim says it’s important that if IRC can fairly and adequately collect such a huge amount of outstanding taxes from companies that will offset the tax burdens incurred on citizens.

Koim says at the moment there are a lot of free carriers and few people are sustaining the government budget so if the tax rates are reduced now, then the government will definitely have a big financial problem in running the country.

Confident about the security of the vote: Bougainville Referendum Commission