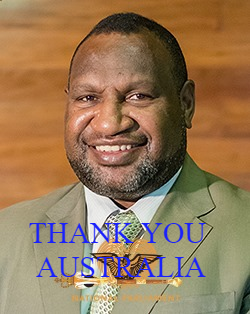 Mr. James Marape in a statement released yesterday (Saturday) said that the loan is a result of his first State visit to Australia after becoming Prime Minister, and it will be one of the cheapest compared to loans undertaken by the previous government.

Marape also said that this funding is the first significant concessional loan Australia has ever offered to anyone in the world, and it reflects the confidence they have in the extensive and comprehensive reforms undertaken by the Marape/Steven Government.

The Prime Minister further adds that the reforms they have undertaken are aimed at repairing the budget, improving revenue, and strategically target expenditure to growing the economy and removing trade barriers to propel overseas exports.

He further added that these actions are important because it will assist the government better respond to the country's development needs and access to electricity and safe drinking water which is now lacking.