For a former prime minister with a warrant out for his arrest and allegations of official corruption hanging over his head, Peter O’Neill is quite calm.

But his breakfast order of sunny side up eggs goes cold as he responds to questions about those accusations, his leadership legacy – and those infamous Maseratis. 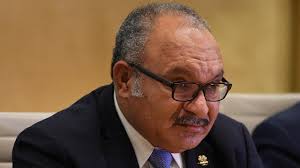 Sitting at a corner table in the slightly frayed white-linen grandeur of Port Moresby’s Crown hotel, where the deposed Papua New Guinea strongman holed up in May during the political showdown that ended his eight-year reign, he says he can’t say much about the allegations investigators are levelling at him. And then says rather a lot.

He is composed, but then he has been here before. O’Neill stared down a warrant issued in 2014 as part of a long-running inquiry into alleged fraudulent payments of around $30million (US$20.6 million) to a Port Moresby law firm, which was eventually thrown out by the PNG supreme court in 2017.

Those proceedings were initiated by the muscular, multiagency Taskforce Sweep which O’Neill himself established soon after gaining power in 2011, pledging zero tolerance of corruption. He shut down the taskforce days after it tried to arrest him. “When they [Sweep investigators] became too political, I did close it down, and I had no hesitation in doing so and I would do it again,” he says.

That said, he nominates the enduring odour of corruption in PNG as a regret in reflecting on his time in power. “Without evidence, there is a perception that corruption is rife in every aspect of our society, which is a very poor reflection and poor assessment of our country.”

Of the current allegations, he says they relate to a request for funding from a health centre run by the Lutheran church in Madang in the north of the country.

“They put a proposal to my office. I referred that for funding to our Community Development Fund agency, which I was responsible for. They funded it. They made payments direct to the church. So, what is wrong with that? What is corrupt about that? So, we’ll test the evidence in court, but it’s just rubbish. It’s a politically motivated case.”

Last Friday, a few days after this interview, police withdrew the original warrant in the face of challenges by O’Neill’s lawyers over its validity, but reports indicate that the investigation is not over, and that another warrant may be in the works.

O’Neill is rather more enthusiastic articulating his take on the legacy of his leadership.

On the positive side of the ledger, he boasts of major policy achievements in education and health and “unprecedented economic growth” as well as PNG’s successful hosting of the Apec conference last year, which “certainly put the country into a good light with the rest of the world”.

But the summit generated international opprobrium and domestic fury around the estimated US$135m spent on the event, including the purchase of a fleet of Maserati and Bentley vehicles on the claim they were necessary to transport world leaders including the Chinese president, Xi Jinping, the US vice-president, Mike Pence, the Canadian prime minister, Justin Trudeau, and the Australian prime minister, Scott Morrison.

“Well, I could have bought a pushbike to take the leaders to the meeting,” O’Neill says. “It went to a bidding process. It was the cheapest amount of luxury cars that we could buy for the leaders. What do you expect us to pay for to transport the leaders under the secure arrangements that they deserve as global leaders?”

But PNG is a country with serious economic constraints, high poverty rates, battling a phalanx of consecutive disease emergencies (polio, tuberculosis, malaria and HIV) and the fallout of a devastating earthquake. Might leaders not have been content to forfeit a little luxury within that context?

At this, O’Neill pushes back. “I think you should attend a few of these meetings and find out for yourself,” he counsels. “You go to the next one in Chile and see what sort of vehicles – Audi or Mercedes or Maseratis.” Since the interview, Chile announced it was withdrawing from hosting Apec as street protests raged across the country.

Apec delivered substantial infrastructure to PNG, O’Neill argues. “Look at the roads in Port Moresby” and in other major cities: Mt Hagen, Lae and Goroka. Nonetheless, as the daily, infuriated and distressed posts of ordinary citizens on social media attest, roads and infrastructure across most of the country are so poor it is all but impossible to get a bag of coffee to market or an emergency case to hospital.

“It’s just nonsense to think that because you live in Australia, to come and think that we’ll have roads like Australia, it has taken 200 years to build that … You look at the substantial improvement in infrastructure – in ports, airports, roads, bridges. So don’t give me that nonsense.”

‘These are hard choices to make’

Returning to education, featuring at the top of his legacy list, O’Neill says that over his time school enrolments went from fewer than 900,000 children to more than 2m after he waived school fees. “We enabled many young girls who are always the lowest priorities in families to get an education … to be independent and not subjected to the pressures of family and early marriage and all the other issues we face in a developing country.”

But there is a flipside to this narrative. The policy delivered students, but not the resources to support them. The consequences are plain in broken-down, overcrowded classrooms across the country, and in the concerns of parents and employers about student achievement. The Guardian had just visited a schoolhouse in Western Province with 57 children in one multi-age class, a single teacher, few usable desks and a floor so rotten a visitor had just fallen through it.

O’Neill acknowledges these issues. “But do I make a choice about leaving kids on the street, or putting them in an environment where they can do some learning … is it fair on the girls that they are kept at home? These are hard choices to make.” Investments he initiated in curriculum and teacher training will, over time, yield improvements, he says.

On health, he claims he delivered increased spending and a program of free basic healthcare throughout the country, particularly to rural and remote populations.

But an Australian National University analysis identified a 37% cut in the health budget in real terms from 2014 to 2016. Doctors, health workers and aid agencies have expressed alarm about the collapse of basic health services and the medical supply chain. Public distress around the lack of health services was a focus of mass protests ahead of APEC.

A national audit in 2017 documented widespread “unavailability of lifesaving and essential drugs” and the National Doctors Association blamed the closure of many rural health facilities for lack of supplies or workers on “endemic and epidemic” corruption.

As to how this looks on the ground, the Guardian recounted the case of a family it encountered in Gulf Province scrambling to find 150 kina (A$63) to put fuel in an ambulance to get a teenage boy with snakebite to the nearest hospital, because the aid post was out of antivenom. (At the same aid post, a mother of six had recently died in childbirth because there was no fuel in the ambulance.)

“It is more of a management problem than government not prioritising,” O’Neill responds. “As far as I know, funding allocations for the health sector during our term in government has been the highest by any government since independence. Those fundings have been made available as a priority every year.”

The economy is the other aspect of his legacy O’Neill highlights, claiming to have doubled GDP and maintained sustainable economic growth despite crashes in commodity prices and global challenges.

A recently published 2019 PNG Economic Survey by ANU and the University of PNG tells a different story, citing World Bank assessments showing PNG falling into the category of fragile state from 2013 to 2017, with plummeting scores on economic management over O’Neill’s reign.

Soon after gaining power in May, the country’s new prime minister, James Marape, described the economy as “struggling and bleeding”, and when he handed down the budget last month he said the country was in a “very deep economic hole”, appealing to Australia for help. O’Neill has vehemently disputed this reading of the numbers.

PNG will face a significant test in coming months as a long-awaited independence referendum in Bougainville gets under way later this month. A Lowy Institute analysis anticipates an overwhelming vote for independence, but O’Neill warns that this could lead to a fracturing of PNG.

“We’ve got almost a thousand nations in this country,” he says. “Is the international community going to support them if any one of them decide tomorrow that ‘we’ve got a goldmine now, we’ve got an oilfield now, so we want to be independent’? That’s the danger that we are facing.”

Under the arrangements hammered out under the Bougainville peace agreement, “the referendum outcome is not the final determination of independence on Bougainville. It has to be endorsed by parliament. And I’m sure the parliament will make the right decisions.”

This despite warnings that any refusal by the PNG government to ratify the result could lead to unrest.

Of the Manus deal to take asylum seekers trying to reach Australia, O’Neill says he has “no regrets”. It brought jobs, money and infrastructure to the island of Manus, he says.

“Nobody gives us credit for stopping the boats in Australia. Papua New Guinea proposed the idea to Australia, because we had the refugee centre (from earlier Somare-Howard government arrangements). We revived that to stop the drowning at sea and it saved thousands of lives. But people forget all this.”

And finally, O’Neill discusses the controversial A$1.24bn(US$853 million) 2014 loan arranged by UBS Australia, now the subject of a PNG royal commission investigation. O’Neill used it to buy a 10% stake in resources company Oil Search. When the oil price tanked over the following year, PNG lost an estimated $420 million (US$288 million).

With his leadership already fracturing, fallout from a damning Ombudsman Commission of PNG report on the “highly inappropriate” and “speculative” loan saw him finally deposed. Was it a mistake to take the loan, and to bypass parliamentary approval?

“I don’t believe it was a mistake”, he says, adding he had the authority to borrow the money.

“The Oil Search shares were mortgaged to the United Arab Emirates … One must remember that Oil Search is still one of the biggest taxpayers, employers and investors in PNG, that it has substantial holdings in our resources sector and our people have been calling for more and more ownership, and more and more benefits from these resources, so as a government it is our responsibility to try and secure that.”

“They’ve found that these arrangements were in order, except that nobody predicted the collapse of the world prices … I mean, nobody could predict it. So we were caught in a situation where we needed to sell down these shares to try to repay the loans to UBS.”

On Tuesday, it was reported that PNG had indefinitely delayed an inquiry into the loan. The inquiry’s chairman, Salamo Injia, said the commission has yet to line up the funding it needs as well as foreign lawyers to work with the commission.

“Until these and other outstanding administrative arrangements are completed by the government agencies and officers concerned, this Commission is unable to sit today and is unlikely to sit any time soon,” Injia said in a statement.