Solomon Islands set to graduate from LDC in 2024

10/27/2019 Headlines, PNG News, Solomon Islands News
Solomon Islands will be graduating from its status as a Least Developed Countries (LDCs) in 2024.

This was revealed by the Secretary to Prime Minister Dr Jimmie Rogers after a joint high-level dialogue with United Nation (UN) Resident Coordinator Sanaka Samarasinha in Honiara, Thursday. 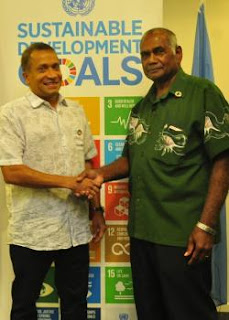 He said as part of the target the government will have a medium term development plan 2020-2024 that will also align with the national development strategy long term plan 2025.

He said by mid of next year, Solomon Islands will undergo a voluntary reporting on SDGs.

“It is very important as we report against a voluntary target for Solomons that we also cross triangulated and link this to our own SDGs as we go forward,” he said.

Dr Rogers said preparatory work that has been done jointly by the UN and the government’s technical team to prepare for a high level workshop has actually been very effective.

He said they have identified six thematic areas within the programme and that include climate change, resilience, gender equality, inclusive economic growth, basic services which include health and education, good governance and accountability and human rights.

“Across the six thematic areas, they would be themes that affect all of them and there’s a thinking that we can pull those areas so that as we improve on them, we actually improve on all the six areas,” he added.

Dr Rogers said every single SDGs and everything in the national development strategies are captured in the six areas.

Meanwhile, the LDCs are a list of developing countries that, according to the United Nations, exhibit the lowest indicators of socio-economic development with the lowest human development index ratings of all countries in the world.

It further reported that there are currently 47 countries on the list of LDCs which is reviewed every three years by a committee for development partners.

LDCs have exclusive access to certain international support measures in particular in the areas of development assistance and trade.

In Oceania, the four countries classified as least developed countries are include; Kiribati, Solomon Islands, Tuvalu and Vanuatu.