10/28/2019 Headlines, Pacific News, Vanuatu news
Vanuatu Community leaders will march through the streets of Port Vila on Tuesday, to hand-deliver a historic petition to Vanuatu’s National Parliament and Government. 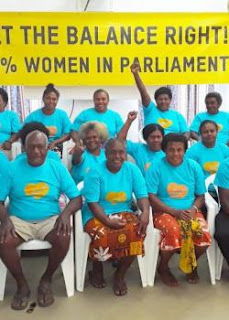 The petition calls on government to introduce and Members of Parliament to pass a Bill on Temporary Special Measures (TSM) for quotas or reserve seats for 50 percent women in Parliament in 2020 and beyond in November 2019 Ordinary Session of Parliament.

“We believe in a strong and ethical Parliament that truly represents the people of Vanuatu. But right now, our Parliament is broken. Our Parliament has lost its heart!” said Jeannette Lini-Bolenga, Programme Manager of Governance Leadership and Accountability (GLA) at Oxfam in Vanuatu.

“It’s time to get the balance right, for all citizens of Vanuatu. The solution is clear: Vot Woman!”

The march will begin at Independence Park at 8am on Tuesday, and finish at 11am at Parliament House.

Community leader Madlen Netvunei, a member of the Vanuatu Civil Society Disability Network, will hand-deliver the petition to Government and Parliamentarians.

Vot Woman supports all women who are standing up to contest the 2020 elections, regardless of whether they are running as an independent or as part of a political party..