10/21/2019 Headlines, World News
The claim that China has engaged in “debt-trap diplomacy” by offering loans worth hundreds of billions of dollars to strategically located Pacific island nations, leaving them vulnerable to China’s influence, has been hosed down in a new Lowy Institute report. 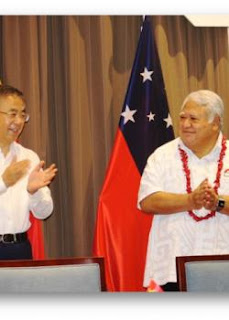 “The evidence to date suggests China has not been engaged in deliberate ‘debt-trap’ diplomacy in the Pacific," researchers at the foreign policy think tank concluded.

Beijing was accused by Harvard researchers 18 months ago of using its US$1 trillion international infrastructure building fund known as the Belt and Road Initiative to push 16 Asian and Pacific countries into debt in order to extract geopolitical concessions.

This accusation against Beijing comes as China emerges as a major new financier and the Pacific once again becomes an arena for geostrategic competition among much larger players.

While the Lowy Institute researchers argue there is no evidence of debt-trap diplomacy, their report found that Australia's regional neighbours in the Pacific face an “especially acute” risk of being saddled with unsustainable debts from China.

“What we argue is something more nuanced, where China’s lending behaviour to date hasn’t been so problematic that you would call it a debt-trap but there are indeed worrying aspects which pose clear risks going forward for some countries,” said the report's lead author, Roland Rajah.

Of the six Pacific governments that owe money to China, the report found China has become the single largest lender to Tonga, Samoa and Vanuatu.

“[They] appear to be among those most heavily indebted to China anywhere in the world,” Rajah and his co-authors Jonathan Pryke and Alexandre Dayant found in Oceans of Debt? Belt and Road and the Debt Diplomacy in the Pacific.

The authors argued the sheer scale of China’s lending meant it should adopt multilateral development bank lending rules and "require the provision of concessional financing to countries at greater risk of debt distress.”

Modelling from the research shows four of the six countries that borrow from China — Vanuatu, Samoa, Tonga, and Fiji — are already effectively at a warning threshold and, with the exception of Fiji, are likely to be pushed into unsustainable debt.

“Vanuatu stands out as a particular concern...while Papua New Guinea would also see a dramatic increase in debt beyond our warnings threshold,” the report found.

Despite China's expanding presence in the region and the vast nature of the Belt and Road Initiative, the report's analysis shows China was not the dominant creditor in the Pacific.

“China was responsible for 37 per cent of all official sector loans disbursed to the region in 2011–2017. The Asian Development Bank provided a slightly higher share, at 41 per cent.”

China's increased presence has prompted the Australian government to respond with its own new debt-financing initiatives as part of its broader Pacific ‘step-up,' but the authors caution that if Australia wants a stronger presence in the Pacific, it should reverse the current stagnation in its overall aid budget....