9/17/2019 Headlines, PNG News
Oro Governor Gary Juffa has allocated K500,000 to the PNG Civil and Identity Registry (NID) to establish the NID provincial office in Oro Province that was burnt down last year. 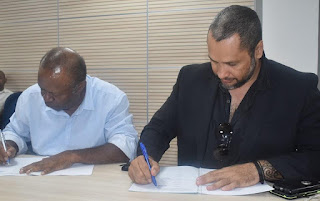 In a Memorandum of Understanding (MoU) signed last week (tuesday) between Juffa and NID Acting Registrar General Noel Mobiha, Juffa said NID was important for his province and the people.

"We will assist wherever we can and want you to come and put up the building and operate as soon as possible," Juffa said.

He said NID was improtant for all citizens to be identified with including the people of Oro and it was unfortunate that the building they were operating out of got burnt.

"We will continue to assist with budget support every year apart from the K500,000 allocated for this year," he said.

Juffa said while the provincial government was struggling with short falls in budgetary allocations, his government would continue to work in partnership with national functions that are focused on delivering services to his people.

NID will not only assist people to identify themselves but also have access to much needed government support services such as medi-care, education, elections, travels and alot more advantages to it, Juffa said.

Acting Regisrar General Mr Mobiha said he was thankful with Governor Juffa for understanding the need for NID registry in the province.

"We have lost documents and capital ewuipment in the fire but we want to thank Governor Juffa and his provincial government for allocating most needed funds and resources," he said.

Mr Mobiha also informed Juffa that once they are up and running, all rural areas will be covered for registration.

"We are also planning to undertake registration for our people living in the foot print of Kokoda to register all our those living along this historical path," he said.

Mr Mobiha said his team would also need a vehicle to do mobile operations for rural popondetta areas connected by roads.
"This is so that we can plan and deploy mobile kits to the two districts with a strategy rather than rolling out. So far we have done plans to set up office in Popondetta Provincial administration yard," he said.