8/20/2019 Headlines, PNG News
The Minister for PNG Correctional Service Hon. Chris Yer Nangoi says he expects more input from all PNGCS officers around the country in taking back PNG, in alignment with the Marape-Steven government’s slogan. 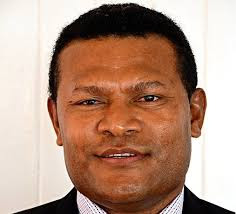 “We can do this by making sure that we grow our own food to sustain and also to supplement the rations given to our Detainees.

“We can do this by carrying out and maintaining our facilities; like maintenance work to staff houses and other facilities.”

“I would like to see more low risk detainees being sent out to provide Community Service work to clean towns, do maintenance work for schools and hospitals, and to carry out awareness campaigns to educate and encourage school aged children and young people to stay away from crime.” he said.

“This will ensure that we stop detainees from escaping in our Correctional Institutions,” Nangoi said.

He said he expects Commanding Officers, Commissioned Officers, and Officers at Institutions to always be at their highest discipline, at work and during your off-days as they are members of one of the country’s three disciplinary forces.

Nangoi says in his short time in office, he has made a commitment with the Commissioner to make sure that Community Correctional Centre’s (Rural Lock Up) in Bogia, Menyamya, Kabwum, Baiyer and Balimo be commissioned between 2019-2022.

“I want to push to the Government for more budgets to fix the ongoing infrastructure problems we face like poor staff houses, poor detainee facilities, fences etc,” he said.

He said together, they all can make the CS Department a corruption-free organization when they comply to laws, and to instructions from the Government, from him as Minister, and from the Commissioner, and use the budget, resources and time wisely.

Nangoi told the Beon officers that he wants to see every Officer working in Operations as Custodial Officers, as Project Officers so that Beon Jail in Madang can become the best model correctional institution in this Country.
SHARE THIS
Share it Tweet Share it Share it Pin it