8/29/2019 Business, Headlines
Pacific Towing is once again showcasing its maritime expertise not just in PNG and Oceania but also South East Asia.  In August the company completed a 5,610 NM (i.e., 10,389 KM) and 44-day ocean towage project of a large barge (128 M x 36 M) between Micronesia and Indonesia.  The project also incorporated a detour to Rabaul on the way home to tow a stranded tanker to Port Moresby for repairs. 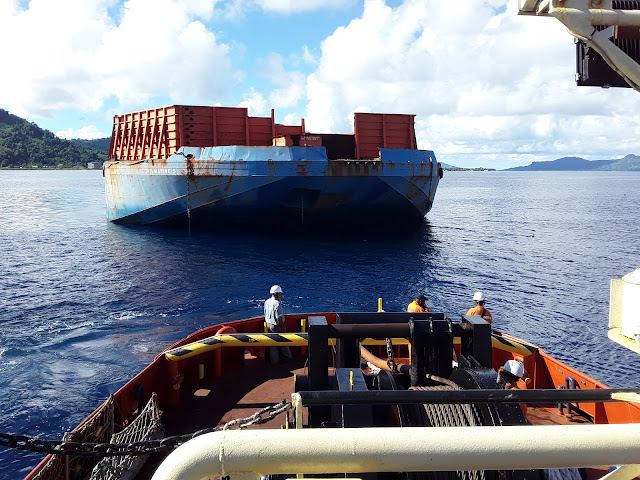 Pacific Towing’s tug ‘Vulcan’ with its 100 percent PNG crew completed the towage project.  The Vulcan chartered a circuitous route overall.  After leaving Port Moresby the Vulcan travelled first to Micronesia’s Chuuk Islands to clear customs, then to Satawan Atoll to retrieve the barge.
Captain Jethro Lumbuk says the tug and its crew negotiated narrow channels and atoll entry points with the cumbersome barge at the Micronesia stage of the project.  “People were cheering and obviously impressed when they saw us towing the barge back in to the harbour” recalls Lumbuk. “I don’t think anyone there had seen a tug the Vulcan’s size pulling such a large vessel before and local authorities were relieved to have it removed from the atoll before it could do further damage.”
The Vulcan and its crew left Micronesia for Indonesia with the barge on 6 July and encountered severe weather that was experienced by much of the Pacific.  “It was really, really rough” recalls Chief Engineer Michael Taweg.  “When the conditions are that bad, you’re grateful for rigorous maintenance programs and the calibre of the crew around you.”  Even, the least experienced of the Vulcan’s crew, Deck Cadet Emmanuel Simoi, had plenty of seatime having worked on maritime projects in Philippines, Taiwan, Vietnam, Japan and Singapore.  Despite the challenges posed by the weather, Taweg reports that the impressive seamanship of the crew kept the barge out of any real danger and they safely arrived in Bitung Indonesia on 23 July.
Operations Manager, Gerard Kasnari, explains how Pacific Towing was originally contracted to salvage, not tow, the Indonesian-owned barge at the centre of the project.  “The barge had run aground on an atoll not far from Chuuk and Singapore marine consultants and brokers, ALC, approached Pacific towing to salvage the vessel.  The contract was signed and we were about to mobilise but big seas from a cyclone actually re-floated the barge so we ended up with a towage contract instead.  The brokers must have been pleased that we were able to literally switch from ‘salvage mode’ to ‘towage mode’ and hundreds of thousands of dollars were saved.”
Pacific Towing is increasingly finding itself leading or partnering in complex marine projects throughout Oceania and South East Asia.  General Manager, Neil Papenfus, describes the Micronesia-Indonesia towage project as not just having a level of technical complexity – largely due to weather conditions and remoteness – but also project management complexity, especially since it involved so many different parties operating from multiple countries.  Although he acknowledges Pacific Towing’s key role in the project’s success, he is quick to give credit to the port authorities in both Micronesia and Indonesia, as well as to the pilots and shipping agent, Transco, in Micronesia and ALC Consulting Services in Singapore who coordinated the project.  “Our project partners have been exceptional to  work with and we look forward to collaborating with them on new projects throughout Oceania and South East Asia” says Papenfus.
Papenfus attributes Pacific Towing’s growing popularity as a marine services provider in Oceania and South East Asia to a number of factors.  “Our tugs are crewed by expert mariners who have exceptional knowledge of the waterways.  They know how to navigate out of, and away from, dangerous situations without having to sever towage ropes and sacrifice the vessels they tow.  In fact, in 42 years we’ve never had to abandon a vessel.  We’re also gaining a reputation for our capacity to problem solve, think outside the box and change tack when necessary, as was evident in Micronesia when the nature of the project completely changed.  Our marine engineers also possess an uncanny ability to design, engineer and implement solutions which means that our clients have fewer contractors to deal with on their projects; an obvious bonus as this reduces costs and the complexity of managing the project.”
To learn more about Pacific Towing:  www.pacifictowingmarineservices.com.